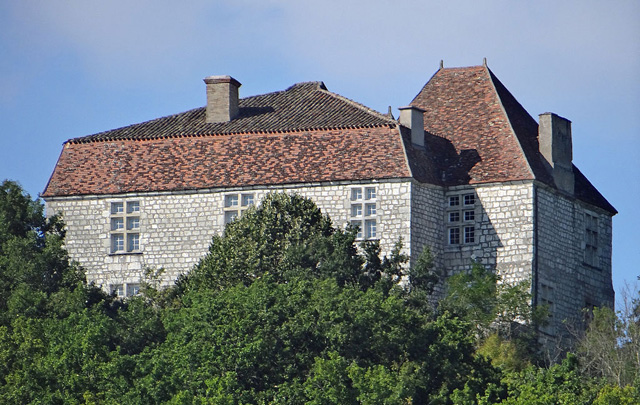 Location: Penne-d'Agenais, in the Lot-et-Garonne departement of France (Aquitaine Region).
Built: 12th-13th century.
Condition: In good condition.
Ownership / Access: Privately owned.
ISMH Reference Number: PA00084289
Notes: Château de Noaillac is a castle located in the town of Penne-d'Agenais, in the department of Lot-et-Garonne.A Romanesque tower had to be built at the end of the twelfth century or the first quarter of the thirteenth century. It is visible only from the inside of the castle in which it was embedded. Castle Noaillac is not quoted in the tributes of the thirteenth century}. The family members of Noaillac Noalhac or cited in the text are related to Paga families. The ostal Noaillac is quoted in 1416 as possession of Arnaud Bayle. It is likely then that the vaulted hall was built next to the tower. THE fifteenth century, the castle is a co-lordship by the families of Bonal and Latour. Charles de Montpezat is lord of the land of Noaillac. He paid tribute to King August 20, 1472 castles and castle-Montpezat, Linias, Aiguillon, pressus, Dolmayrac Noaillac and land with its appurtenances in the jurisdiction of Penne1. His sister, Esther Montpezat, married to Helie de Bonal, inherits his death. His son, Jean Bonal, is lord of Noaillac, Bonal la Roquette and the Tower of Lascombes2. Yon Bonal tribute to King Francis I April 5, 1540 for its land in Noaillac, Bonal la Roquette and LaTour de Lascombes. The presence of co-lords can explain the construction of a second residence inside the enclosure castrale in the early years of the sixteenth century. At the same time, the old castle was enlarged with the construction of a tower staircase, with a new home added against the dungeon. These works seem completed with the construction of the chapel in 1530. In the second half of the sixteenth century, the Latour family has grouped the whole castle to Jean de Latour. In 1572, Antoine de Latour sells the castle Anthony Ladugie. His only daughter, Catherine de Latour, married in 1587 with the Huguenot Captain Jean Vivans son of Geoffrey of Vivans. The second residence is neglected and important work is done in the first residence in the late sixteenth century and the first decades of the seventeenth century. A new home is built encompassing the Romanesque tower. Their son, Pierre Vivans, married Marie Daussy, died before 1656. Their daughter, Anne Vivans Noaillac, married in 1656 with Jean Vivans, Sieur de Launay, who died Dec. 8, 1691, without descendants. Henri Vivans his brother cavalry brigadier, Sieur de Launay, Saint-Christau, Lord of Noaillac is Marquis Vivans. He married in 1655 with Suzanne Capvert, died in 1704. Their son John Vivans, lieutenant general of the king's armies, is Marquis de Noaillac, died in 1719. He is married to Louis Meuves (1701-1752) he has a daughter, Suzanne-Marie Vivans, Marchioness of Noaillac, married in 1722 with Pierre-Antoine de Jaucourt (1687-1780), Marquis of Chantôme. The Lordship of Noaillac is erected in marquisate in 1696. During the revolution, Noaillac was bought by Nicolas de Neymet, from Hautefage la Tour. The castle will remain in the family until 1952. The land registry from 1830 shows that there have been no additions since. The monument was listed as a historic monument since December 24, 1990.

How To Get To Château de Noaillac (Map):