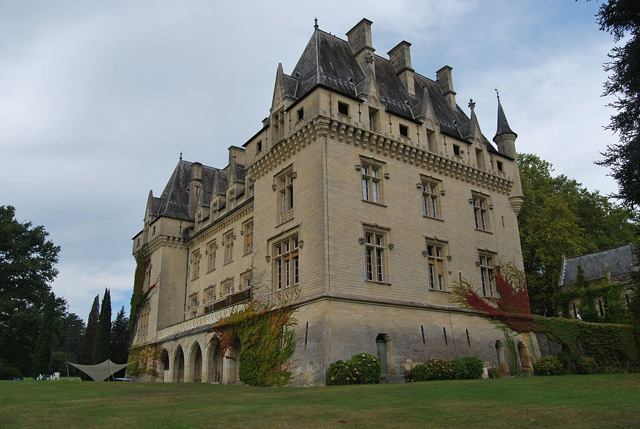 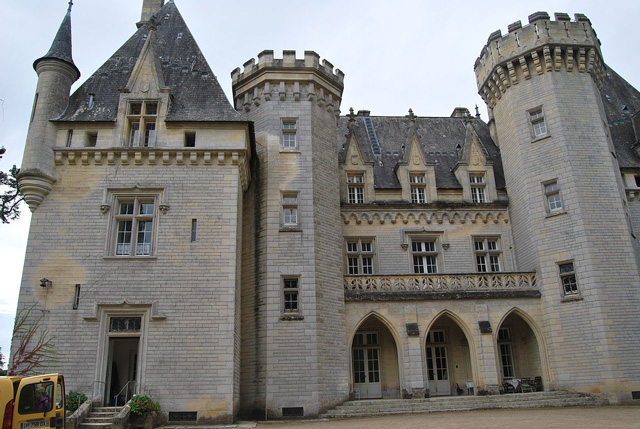 Location: Gardegan-et-Tourtirac, in the Gironde departement of France (Aquitaine Region).
Built: 15th century.
Condition: In good condition.
Ownership / Access: Count and Countess de Boigne.
ISMH Reference Number: PA33000134
Notes: Château de Pitray is a castle located in the town of Gardegan-et-Tourtirac, Gironde. The present castle, originally a feudal manor of the fifteenth century, rebuilt in the sixteenth century, was completely rebuilt in 1870 in neo-Gothic style. The mansion was built in the fifteenth century by the Prieur family. It was rebuilt in the sixteenth century by their descendants, a branch of the family of Segur. In 1715, Françoise, only daughter, married Elijah Simart, former alderman of Saint-Emilion. Under the Second Empire, General de Simard Pitray had built the present castle by the Bordeaux architect Alphonse Blanquière (1829-1899). This building is neo-renaissance style in fashion Viollet-le-Duc. The walkways leading to the castle open on the north terrace, old courtyard common at the corner of which was built the chapel. To the east, the common form of two rectangular buildings separated by a courtyard. A circular pigeon stands in the corner. Stables were built in the north. To the east is a large naturalistic park in the valley plunging southward. The park, dominated oak and cedar trees, was designed by the Bordeaux nurseryman Jean Escarpit (who also designed the Jardin Public in Bordeaux). A short distance from the castle in the woods, a 'covered alley' (dolmen), the cover slab is gone. Current heirs, the Count and Countess de Boigne, maintain family ownership with a traditional wine business. The monument is the subject of a registration as a historic monument since April 19, 2010.

How To Get To Château de Pitray (Map):