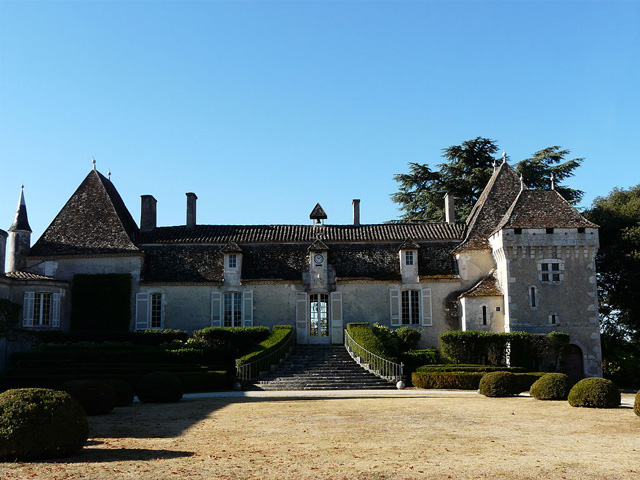 Location: Eymet, in the Dordogne departement of France (Aquitaine Region).
Built: 18th, 19th century.
Condition: Ruined.
Ownership / Access: Privately owned.
ISMH Reference Number: PA24000051
Notes: Château de Pouthet, or chartreuse Pouthet, is a French château located in the town of Eymet in the Dordogne, in the Aquitaine region. It is subject to protection as a historic monument and the park is labeled remarkable garden. Built in the eighteenth century, the building was heavily modified in the following century. This is an old winery. The house is oriented east-west. It is bounded at each end by a flag and form a raised chartreuse, accessible north side by a grand staircase and fourteen steps south side by a double staircase. Côté, a former dependency wing forms an L with the house. To the west of the house, a tower with false battlements was built in the nineteenth century6 to replace a wing destroyed by fire, and the eastern side, a thin turret does pendant1. New common were built in the north to forty meters of the house. The building and grounds are registered as historical monuments June 23, 2006. The estate, with its park, its massive boxwood its avenue of cedars and its polychrome vegetable garden, is ranked among the outstanding gardens.

How To Get To Château de Pouthet (Map):