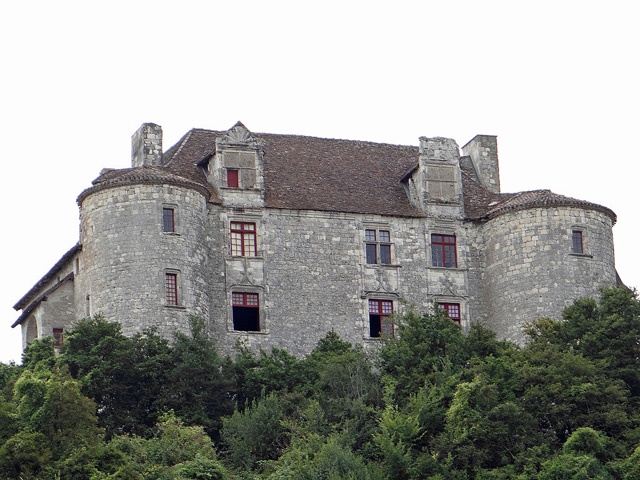 Location: Dausse, in the Lot-et-Garonne departement of France (Aquitaine Region).
Built: Appears for the first time in 1288.
Condition: Partially Ruined.
Ownership / Access: Privately owned.
ISMH Reference Number: PA00084102
Notes: Château de Puycalvary in Dausse is located in the department of Lot-et-Garonne and the Aquitaine region. The date of construction of this fortress is unknown. The castle appears for the first time in 1288 in an act when it is shared between Palazols brothers. The description shows that the castle is the current turn-room kind in the region. There remain the ruins of an old tower of the thirteenth century. The stately chapel is located under the castle, with which it communicates via a staircase that leads to the galleries arranged in the wall at the start of the vaults. It was built with a choir and a polygonal vault on intersecting ribs. The porch columns and kale dates from the late fifteenth century, in the eardrum, a niche with shell. A square tower serves as a bell tower, topped pyramid. The castle suffered little during the Revolution. The castle was bought in 1815 by Pierre-Philippe-Marie Souilhagon of Bruet, a former adviser to the referendum Bordeaux Parliament. His daughter Catherine-Jeanne-Françoise-Adèle Souilhagon Bruet of it marries in 1811 with François-Antoine Lambert Lalis10. The family kept it until the twentieth century. The castle was registered as historical monuments in 1925.