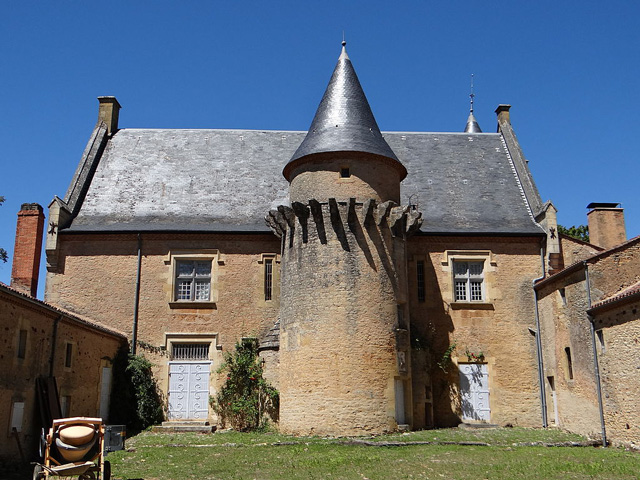 Location: Saint-Cernin-de-l'Herm, Dordogne departement of France (Aquitaine Region).
Built: 16th century.
Condition: In good condition.
Ownership / Access: Privately owned.
ISMH Reference Number: PA24000055
Notes: Château de Sineuil is a French château located in the municipality of Saint-Cernin-de-l'Herm in the Dordogne, in the Aquitaine region. It is subject of protection as historical monuments. Brought to Vassal marriage with La Capelle Sineuil, it is not impossible that the latter family is a branch of the family Vassal. Jean Secret could write in 1966: "Castle Sineuil is the Vassal for centuries, but the loss of its archives do not confirm it." The castle was built in the second half of the sixteenth century. The stair tower indicates the gate 1578. One can see heraldic animals hammered supporting a shield. The castle consists of a reinforced house two towers. The south tower houses a spiral staircase. The home and the other tower retain quadripartite vaulted rooms of warheads. The castle has two wings flanking the courtyard south side. A third set of common lies east of the previous one. There was a church dedicated to St. Barnabas in the castle garden. It was dated from 1678. It still existed in 1860. This chapel may have been built at the request of the Church as a result of a consanguineous marriage. Crumbling, the chapel was destroyed in the nineteenth century. Château de Sineuil was registered as historical monuments November 14, 2006.