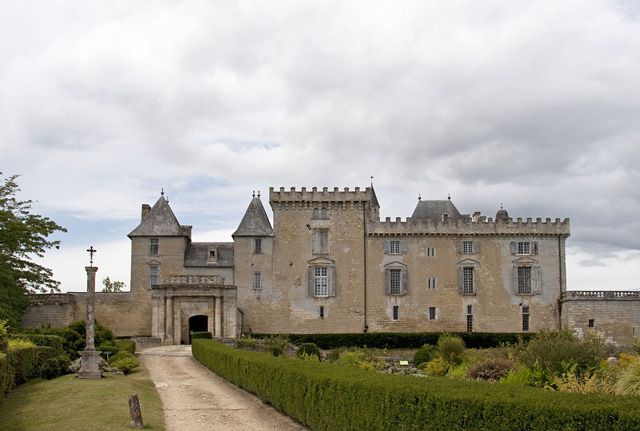 Location: Vayres, in the Gironde departement of France (Aquitaine Region).
Built: 11th century.
Condition: Well maintained.
Ownership / Access: Private property. Resort.
ISMH Reference Number: PA00083856
Notes: Château de Vayres is located in the town of Vayres in Gironde, France, about 25 km from the center of Bordeaux. This Middle Age fortress is situated on the banks of the Dordogne it dominates. Vayres Castle was redesigned in the Renaissance and then in 1700. Its history is linked to that of the city of Bordeaux he has long attended to protect. It belonged to the family of Albret to King Henry IV, who sold it to a famous Bordeaux family, Gourgue. Overlooking the Dordogne, on the axis of communication with the center of France, the site of Vayres was occupied very early in history. Indeed, it was of great strategic importance, particularly in defense of Bordeaux. Excavations have led to the discovery of pottery kilns from the Roman times confirming the presence, even then, a large population. At a Gallo-Roman oppidum succeeded first wooden castle. The gardens of the seventeenth century, represented in a so-called burning Claude Chatillon, were vast and parallel to the Dordogne. Abandoned and replaced by grasslands, they were recreated in 1938 with a simpler design, but always regular, of exquisite French by renowned landscape architect Louis-Ferdinand Duprat. The park is labeled Remarkable Garden. Guided tours take place every day for groups (by reservation), and Easter to Halloween for individuals. Activities are planned and renewed each year: completing the puzzles of course tours, afternoon children in the family, educational days for school groups, costumed nocturnal and dramatized for all, etc.

How To Get To Château de Vayres (Map):