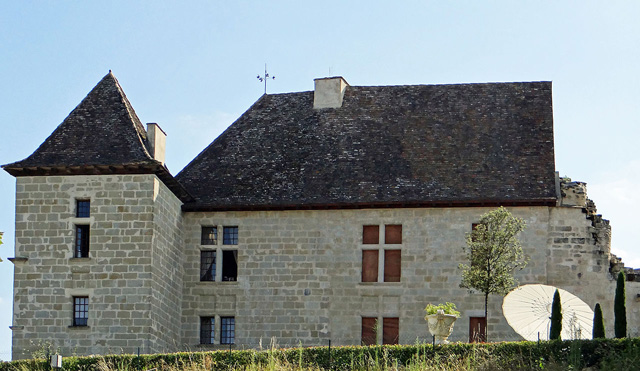 Location: Verteuil-d'Agenais, Lot-et-Garonne departement of France (Aquitaine Region).
Built: First mentioned in 1259.
Condition: Ruined.
Ownership / Access: Owned by a Private Company.
ISMH Reference Number: PA47000022
Notes: Château de Verteuil is a chateau in Verteuil-d'Agenais, in the department of Lot-et-Garonne. The first mention of the "castrum" of Verteuil date of 1259. At that date it is distributed among several coseigneurs belonging to the families of Caumont and Pins. The original castle was a castle on mound around which the village developed. The lordship belonged to the Albret in 1390. He left in ruins of the Hundred Years War. The medieval remains are found on a rocky escarpment, recut and masonry in places forming a first chamber about 80 meters in diameter. The manor was given to Arnaud de Caumont, Lord of Lauzun, in 1460. This gave the noble house of Roquepiquet in 1470 Mathurin of Gervain. The vaulted hexagonal tower warheads north-west, connected to a curtain, probably dates from the late fifteenth century. The body of principal building, located in the southeast, was built by the family of Caumont in the late sixteenth century or early seventeenth century. The body of west house was restored in 1839 into a school. The entire building was abandoned in 1996. The wing built in the late sixteenth century or early seventeenth century was restored, renamed Castle Valleys and transformed into Hotel3. The castle was registered as historical monuments January 10, 1996.

How To Get To Château de Verteuil (Map):