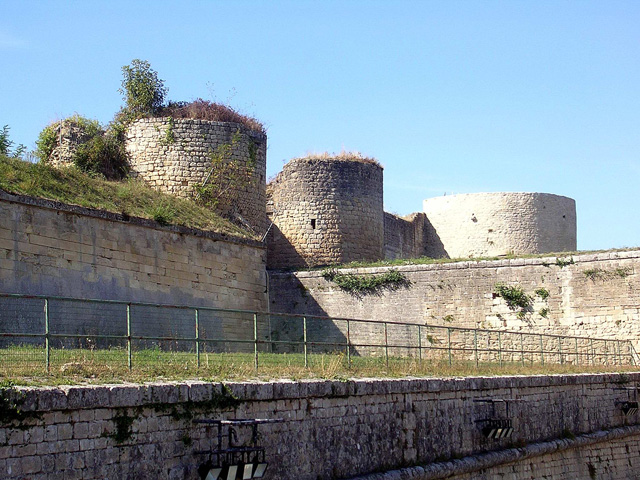 Location: Blaye, in the Gironde departement of France (Aquitaine Region).
Built: 12th century.
Condition: Ruin.
Ownership / Access: Owned by the town.
Notes: Château des Rudel is one of the few remains from the medieval period to have been preserved during the construction of the Citadel of Blaye in the seventeenth century. Now reduced to a state of ruin, this castle dates mainly twelfth century and the thirteenth century. To protect the strong city of Blaye possible enemy incursions, it is built on a rocky outcrop overlooking almost thirty meters of the Gironde estuary. The castle of Rudel is an atypical example of castle architecture in the Aquitaine region. Designed on a triangular plan, it consists of a central courtyard around which revolve the three main buildings themselves protected by curtains and six circular towers. One equipped with a drawbridge door opens into a barbican subsequently revised. Despite the dilapidated building, the original structure remains perceptible. Thus are still found six medieval towers: these are the Round Tower (north), the tower of Diana (southwest), the tower of the door (to the west), the turn on Archives (south), the Bell Tower (northeast) and the keep. Among the missing buildings, ancient texts mention the Saint-Nicolas chapel. Remains of it were found during archaeological excavations in 1959 and are exposed to the archaeological museum.

How To Get To Château des Rudel (Map):