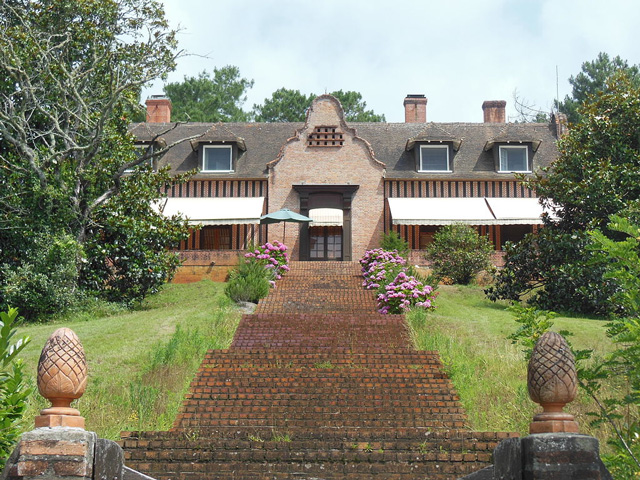 Location: Mimizan, in the Landes departement of France (Aquitaine Region).
Built: 1911.
Condition: Restored.
Ownership / Access: Private.
Notes: Château Woolsack is a former hunting lodge located in the town of Mimizan, in the French department of the Landes. Built in 1911 on the shores of Lake Aureilhan by Hughes Richard Arthur Grosvenor (1879-1953), second Duke of Westminster, it is a replica of the home of Rudyard Kipling, author of The Jungle Book. It is on a site classified by order of 18 July 1978. The Nazi troops occupied Mimizan 28 June 1940. The castle was requisitioned to house the officers. After the Liberation, the house is returned to its owner. On February 7, 1947, the Duke married in fourth wedding Nancy Anne Winifred Sullivan. While the young couple is about to come to honeymoon in Woolsack, the flag caught fire on the night of 23 February 1947 and largely burns. Once before his death in 1953, the Duke will return to Woolsack to decide on the sale of its propriété5. Mr. Sargos restored, the castle in the 1980s becomes the property of the Gascogne Group intends it in seminars and receptions. It is now privately owned.