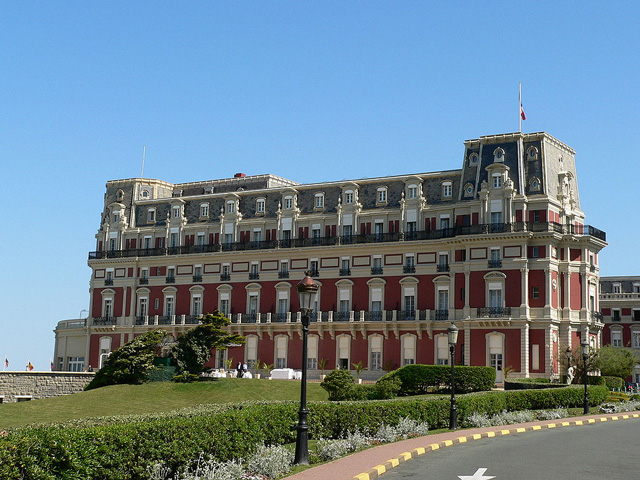 Location: Biarritz, in the Pyrénées-Atlantiques departement of France (Aquitaine Region).
Built: 1854-1855.
Condition: In a very good condition.
Ownership / Access: One of the most prestigious luxury hotels from Biarritz and France.
Notes: Hôtel du Palais is a palace located in the town of Biarritz, in the French department of Pyrenees-Atlantiques. Its facades and roofs are listed as a historical monument by decree of December 24, 1993. The building is built on the site where was the summer residence of the Empress Eugenie, wife of Napoleon III, built in 1854 in the Second Empire style. Villa Eugenie named, it retains that name until 1893, when it was converted into a hotel, before being destroyed by fire in 1903 and replaced by a luxury hotel called "Hotel du Palais". There is virtually no longer retains the original Villa Eugénie, is rated 5 stars and graduated in May 2011 the "Distinction Palace". Ravaged by fire on 1st February 1903, the building was rebuilt in 1903-1905 and became a luxury hotel of 120 rooms and 33 suites. In reference to the first name of the Empress, the building takes the shape of an E, but retains almost nothing of the original Villa Eugénie. The architect Edouard-Jean Niermans, author of this reconstruction, opts for the facades of a neo-Louis XIII style, like the exterior walls of the old Villa Eugenie. The building is very modern yet built in reinforced concrete with a plated decor. The interior decor, including the rotunda dining room, designed by Niermans; the murals on the theme of Jason and the Golden Fleece, are due to the painter Paul Gervais. To date, this is one of the most prestigious palaces of France, its decoration recalling the splendor of the imperial couple. Since May 2011, the Hotel du Palais is one of eight French institutions, and the only one of the Atlantic Coast, to benefit from the official label "Distinction Palace", awarded by a jury chaired by the Minister for Tourism.

How To Get To Hôtel du Palais (Map):