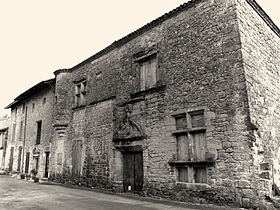 Location: Saint-Pastour, in the Gironde departement of France (Aquitaine Region).
Built: 13th century.
Condition: --.
Ownership / Access: Private.
Notes: The manor Cabirol is a manor, located rue Jeanne-d'Arc in Saint-Pastour in Lot-et-Garonne.The bastide was founded between 1250 and 1259 by Alphonse de Poitiers. We do not know the origin of the name of Cabirol given to the manor. At the most, it can be pointed out that there existed a noble house bearing the name of manor of Cabirol at Saint-Pierre-de-Caubel. There are no documents concerning the construction of this mansion. The Cabirol mansion is the result of the union of two houses in the sixteenth century by a nobleman of the region. The manor includes vestiges of a construction from the second half of the 13th century. The mansion was registered as a historic monument on 30 May 1990.