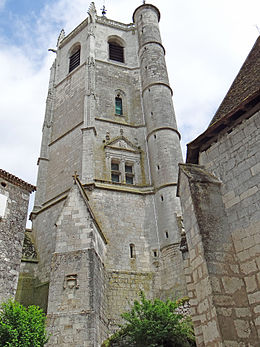 Location: Hautefage-la-Tour, in the Gironde departement of France (Aquitaine Region).
Built: 13th century.
Condition: Abandoned.
Ownership / Access: --.
Notes: Latour is a building located in Hautefage-la-Tour, France.The tower of Hautefage was built by two bishops of Agen of the family of della Rovere: Leonardo Grosso della Rovere, cardinal, bishop of Agen from 1487 to 1519 and his successor, Antonio della Rovere, bishop of Agen from 1519 To 1538. The tower was designed to serve as a residence for the bishops of Agen. Construction has probably not been completed. As early as the seventeenth century, the tower was used as a steeple at Notre-Dame church situated below. In the second half of the nineteenth century it was considered to be semi-ruined. This is the state described by Georges Tholin in his article on the tower in the magazine of the Agenais of 1889. Restoration work was begun in 1888, giving it the present form with a balustrade, the corner buttresses surmounted by pinnacles and the conical slate cover added in the 1910s. The tower was transformed into a water tower in 1957 by placing a reinforced concrete tank on the third floor. The reservoir was abandoned in 1974. Falling stones in 2007 lead to restoration work. The cover has been redone. The water tank was broken in 2013 and a floor was restored. The bells were replaced on the third floor. Floors must be rearranged at the same time as the different levels of the tower The building is listed as a historic monument in 1883.The Hautefage tower is an astonishing building, difficult to classify. Isolated building, it was not intended for defense. In the absence of stone waiting, the tower was not intended to be an element of a larger castle. Placed at the meeting of two hills, it dominates a deep valley. The biggest window opens towards the west. The tower was to be used as a residence for the bishops of Agen. Its location and view were to make it very picturesque, but very uncomfortable distribution, fantasy of a great lord bishop. The tower has a hexagonal plane. Its location on a hillside makes one floor of the tower below the road. From the ridge of the hill, the tower consists of a ground floor and three floors, the divisions of which are made visible by strings. A turret containing the staircase of 122 steps distributing the floors is placed outside in the south-west corner. The semicircular door is surmounted by a pediment whose ornaments have been destroyed. The first floor is lit by two Renaissance-style windows. The one opening towards the west is crossed by two cross mullions and surmounted by a pediment. The one that is almost facing it is narrower, is shared by a single horizontal mullion. The second floor has three broken and trellised hanger windows. The third floor is pierced on all its sides with wide bays.