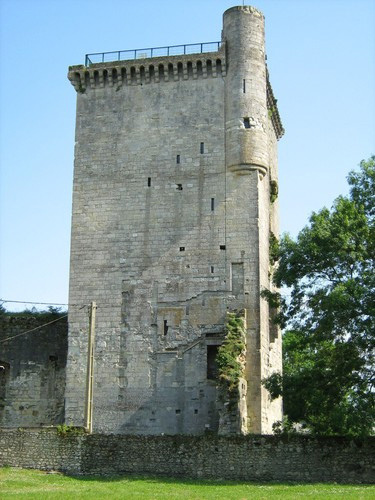 Location: Lesparre-Médoc, in the Lot-et-Garonne departement of France (Aquitaine Region).
Built: 1274.
Condition: Ruined.
Ownership / Access: Owned by the Municipality.
ISMH Reference Number: PA00083592
Notes: Tour de l'Honneur (Occitan / Gascon: tor angina) is one of the only remains of the castle of the lords of Lesparre. Located in Lesparre-Médoc, in the department of Gironde and the Aquitaine region, it is the subject of a classification as historical monuments since 10 September 1913. Centerpiece of a defense system made up of four towers in its heyday, it dates from the fourteenth century. However, a castle existed long before that time, old documents mentioning a "quid Castello dicitur Sparra" the twelfth century2. By the marriage of Eleanor of Aquitaine to Henry Plantagenet, the castle between the Anglo-Gascon lap for nearly three centuries, until 14533. In the Middle Ages, the lords of Lesparre control much of the Médoc. The castle is visited by big names of the langue d'oc, such famous troubadours Aimeric de Belenoi and Pey Corbian. Some lords of the place are a reputation as Florimont Lesparre, gone off to war in the Holy Land, which goes to a duel Pierre de Lusignan, King of Cyprus3! The fortress then passed to the families of Madaillan4, Albret, Foix, of Cleves, Matignon, Épernon and Gramont, before being sold as national property during the Revolution and to be almost completely dismantled bit after. Castle Lesparre, quoted in 1274 and rebuilt after 1303 was called "Castle of Lesparre honor." By extension, the only remaining tower took the name of "Tour of honor" that it retains today. Drawn up in 13205, high of nearly thirty meters, it consists of five levels: a covered ground floor of intersecting ribs and four vaulted rooms. The summit platform retains a line of battlements and a corner turret encorbellement6. Today, the tower of honor houses a museum dedicated to local history, crafts and traditions Médoc.

How To Get To Tour de l'Honneur (Map):