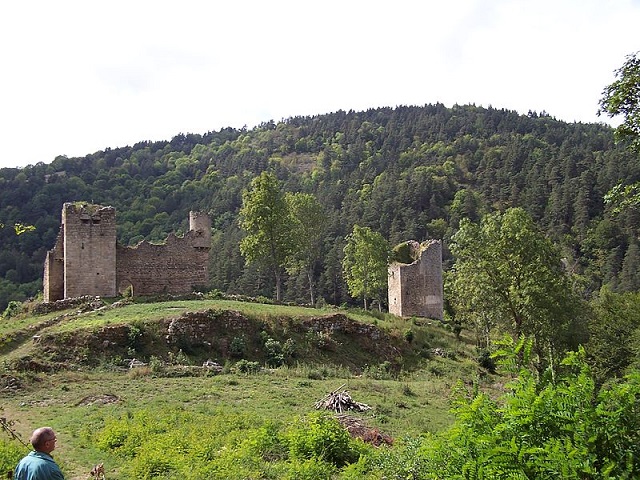 Location: Grazac, in the Cantal departement of France (Auvergne Region).
Built: 12th century.
Condition: Ruin.
Ownership / Access: --.
Notes: The Castle of Carry (also called Castle of Vertamise), is a medieval castle now in ruins. It is located in the commune of Grazac in the Haute-Loire (Auvergne-Rhône-Alpes). It overlooks the valley of Lignon. It has been listed under historical monuments since 1985.It is composed of a dwelling dating from the fourteenth century and a pentagonal tower dating from the end of the twelfth century, beginning of the thirteenth century. The tower is composed of 4 levels of which one is now flush.Its oldest known owner is Hitier de Vertamise in 1136. At the beginning of the 13th century it belonged to the lord of Saussac (whose seigneury is on the eponymous juice above the present village of La Chazelie). In 1827, a farmer rented and used it as a stable; thereafter it gradually falls into ruin.