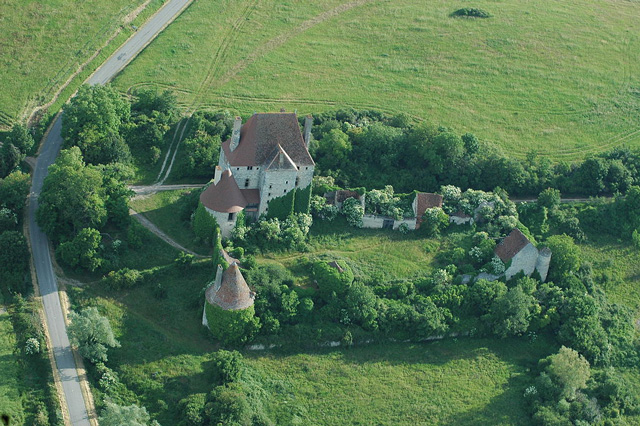 Location: Besson, in the Allier departement of France (Auvergne Region).
Built: 14th to 16th century.
Condition: In good condition.
Ownership / Access: Private property.
ISMH Reference Number: PA00092997
Notes: Château de Fourchaud is located in the town of Besson in the department of Allier in France. It is located near the CEAR and along the road from Besson Bresnay. Castle Fourchaud consisting of a keep and a farmyard, massive remains of the fourteenth and fifteenth centuries, overlooks the Bourbonnais. The original door, which was defended by a drawbridge, is always present in the West Curtain. The home has two floors each consisting of two rooms, situated on a ground floor and vaulted cellars. Located in a hollow, it borders the creek Fourchaud and was once surrounded by a moat, probably filled in the eighteenth century. The moat that surrounded the sunken garden wall were still visible at the beginning of the century. Le Petit Fourchaud, less than 100 meters from the Grand Fourchaud is a dungeon whose high timbered roof pierced everywhere lets consider a sad fate. The situation very close to these two massive dungeons and characteristics of Bourbonnais would be due in the sixteenth century, two brothers which, following an argument, would have wanted to separate. A more logical reason is that the presence of small Fourchaud on a rock rather high it a watchtower that once had to communicate with the tower of the Convent Besson (disappeared) and the castle of Rochefort.