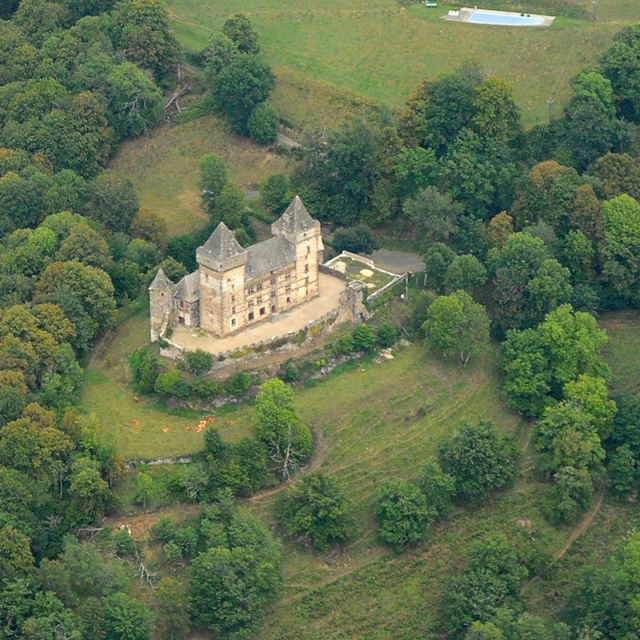 Location: Raulhac, in the Cantal departement of France (Auvergne Region).
Built: 12th century.
Condition: In good condition.
Ownership / Access: Dubois-Rambaud Family.
Notes: Château de Messilhac is located in the municipality of Raulhac in the Cantal. It was established around the twelfth century on a promontory overlooking the Goul Valley. It is brought as a dowry by Margaret of Bénavent Rodez to Jean-Montamat. It is edited in 1537 by Jean de Montamat, coseigneur Polminhac, making it the only intact remnant of the Renaissance in the department. Castle Messilhac shows an example of stately home of the thirteenth century modified in the sixteenth century. It is surrounded by a wall with irregular contours whose relief is obtained by the size of the elongated rock platform on which it was built. Common are backed by the enclosure of the north side. From the ancient wall that protected the castle once, there remains the tower called "the dungeon" currently connected to the castle by a small wing of the eighteenth century. The drawbridge was to be found in the east. Remains of other ancient buildings show the importance of the ancient castle. The beautiful Renaissance main building built in 1531 by Jean de Montamat is flanked by two square towers, the oldest, one of which is the thirteenth century. Their vertices and of the façade are surmounted by a covered walkway, with turrets and battlements angles. Home body has three floors each divided into four parts. They have retained their French ceilings and fireplaces. Mullioned windows, staircase with its vaulted liernes and tiercerons, fireplaces and molded doors attest to the wealth of the owners who built or aménagèrent Castle Messilhac. The door is confined to Renaissance fusiform columns while other ornamentations are more transitional. It has been a listed building March 16, 1921. You can visit the castle of the first Messilhac May to 31 August, 14 h 30-18 h 30. Groups by appointment at 04-71-49-55 -55.

How To Get To Château de Messilhac (Map):