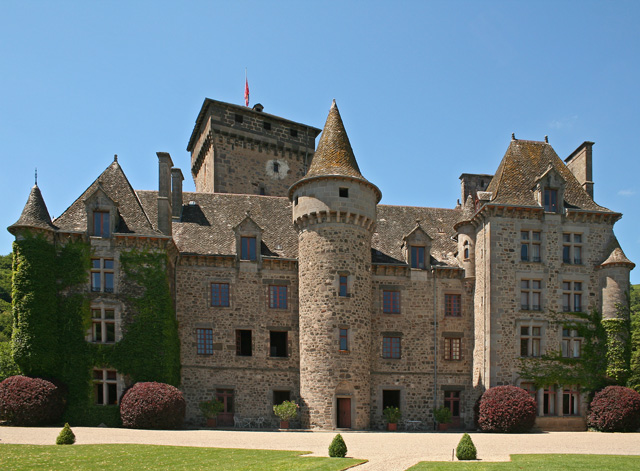 Location: Polminhac, in the Cantal departement of France (Auvergne Region).
Built: 15th century.
Condition: In good condition.
Ownership / Access: --
Notes: Pesteils Castle is a medieval castle in Polminhac in the Cantal. In 1942, he was the setting for the film The Eternal Return with Madeleine Sologne and Jean Marais. It is the subject of a classification as historical monuments since July 18, 1994. The Pesteils castle is located on a rocky promontory overlooking the village of Polminhac and the Cère Valley. The tower 40 meters high dating from the end of the Middle Ages, the fourteenth and fifteenth centuries, the beginning of the Hundred Years War. During the second half of the seventeenth century, home of the body and the corner flag were enlarged. The castle was redesigned by architect Emile Lemaigre in the late nineteenth century. In the nineteenth century, their interiors have been redesigned in the Neo-Gothic taste and redeveloped in the early twentieth century. The fifteenth century frescoes located in the dungeon were restored in 2008 (Sotheby's price), painted ceilings of the seventeenth century, scenes from Greek mythology, adorn two rooms on the 1st floor of the main building. An old kitchen, restored in 2000 received the La Cornue. Murals of the first quarter of the twentieth century Tourdes Félix (1855-1920) are classified historic monument under Item since 1980. The park of the castle of Pesteils was redesigned in the early twentieth century. It has a quay terrace, a vegetable garden and an orchard. It was recorded in pre-inventory of remarkable gardens.

How To Get To Château de Pesteils (Map):