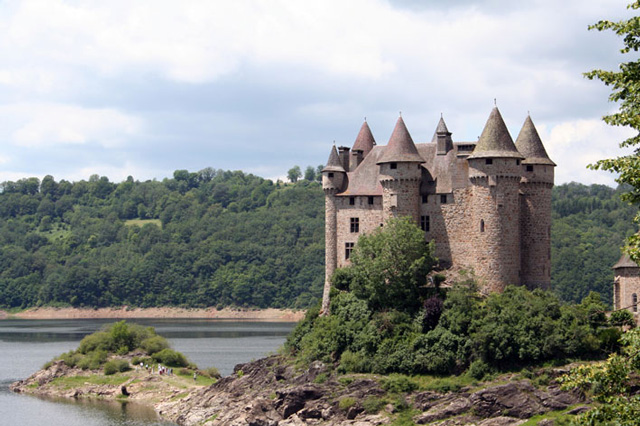 Location: Lanobre, in the Cantal departement of France (Auvergne Region).
Built: 13th century.
Condition: In good condition.
Ownership / Access: Owned by the municipality of Bort-les-Orgues. Open to the public.
Notes: Château de Val, is a former fortress of the thirteenth century, rebuilt and restored several times, which stands on the town of Lanobre in the Cantal department in the country of Artense and Auvergne region. As historical monuments; the castle is the subject of a classification by order of 23 September 1946; St. Blaise chapel part of outbuildings been ranked by order of 7 September 1961; facades and roofs common, fountain, plot the ground on which they are located are subject to registration by order of 10 September 1990. The Val castle was built in the fourteenth century and early fifteenth century. St. Blaise chapel, common and fountain dating from the late fifteenth century. The castle is in the form of a high main building flanked by nearly four turrets of angles. In 1960, a scene of the film Capitan André Hunebelle with Bourvil and Jean Marais was filmed in this castle. For the film he is appointed and serves Clairefont Castle prison where Gisele is enclosed in Angoulême. This is the stage known climbing and dagger that casse3. In 1970, the castle is the castle of Val Morgan le Fay Morgan in the movie and nymphs Bruno Gantillon. In 1984, scenes from the movie Frankenstein 90 Alain Jessua with Jean Rochefort and Eddy Mitchell was shot around the castle.

How To Get To Château de Val (Map):