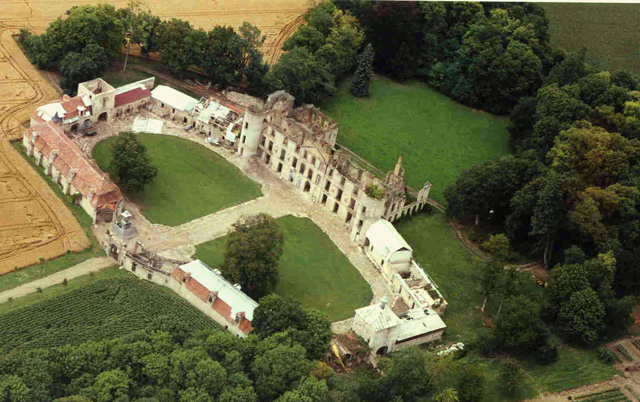 Location: Vensat, in the Puy-de-Dôme departement of France (Auvergne Region).
Built: 16th century.
Condition: It is now on a major restoration.
Ownership / Access: --
Notes: Château de Villemont Vensat is located in the Puy-de-Dome and the Auvergne region of France. Taken over in 1995 to the state of ruins, it is now the subject of a major restoration project. A corporate foundation (FE) carries this project. It was authorized by the Prefect of Puy-de-Dôme 29 October 2009: it should be stressed that innovative aspect because it is one of the first foundations to be created in France for saving a part of the architectural heritage, since the reform introduced by the said Aillagon law on patronage of 1 August 2003. Among other characters who lived in the castle of Marguerite de Veni Arbouze, reformer of the Notre-Dame du Val-de-Grace, was born there on August 15, 1580. A proposed as a historic monument in 1948 is denied. The request for entry of 1965 in the inventory of historical monuments remain unanswered. The castle is partially registered and the outbuildings surrounding the courtyard historic monuments May 17, 1974. The entire castle is listed on October 18th 2011. The whole, including the park, was ranked 19 April, 2012.

How To Get To Château de Villemont (Map):