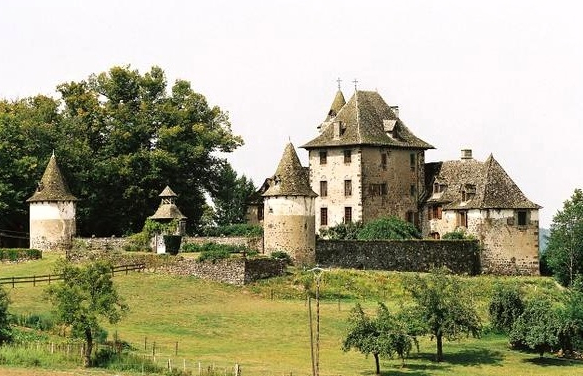 Location: Polminhac, in the Cantal departement of France (Auvergne Region).
Built: 13th century.
Condition: In good condition.
Ownership / Access: Mr. and Mrs. Andrew Leonore.
Notes: Château de Vixouze is a medieval castle in Polminhac in the Cantal. It belongs to the Pilicer-Moncorger family. The entire castle, including walls and turrets, is the subject of a registration as a historic monument since 7 November 2000. Vixouze is mentioned for the first time in 930 as a villa in a donation made by Bernard de Carlat, Viscount of Carlat, in the abbey of Conques mea villa that vocatur Vidditiosa 2. This property was once owned by his parents. In the same document, there is also mentioned as a manse Marfons: mansos meos vocatur quae cum curtes Marifontes and ortos. In 1267 admission to the castle Vixouze is designated as a castle and a tower, and a pastoral letter says Castle. This is probably in part the current tower, dating from the thirteenth century, rectangular plan surrounded by a wall. Very damaged during the Anglo-French wars it was partly rebuilt at the limit century3 fifteenth, sixteenth century tower staircase off-added work, and turned into the seventeenth century pavilion. External open free to the public. Permanent exhibition of paintings by the painter Leonardo. Castle open from 1 July to early September, daily from 15h to 19h. Common are equipped for rent, weddings, seminars or meetings.

How To Get To Château de Vixouze (Map):