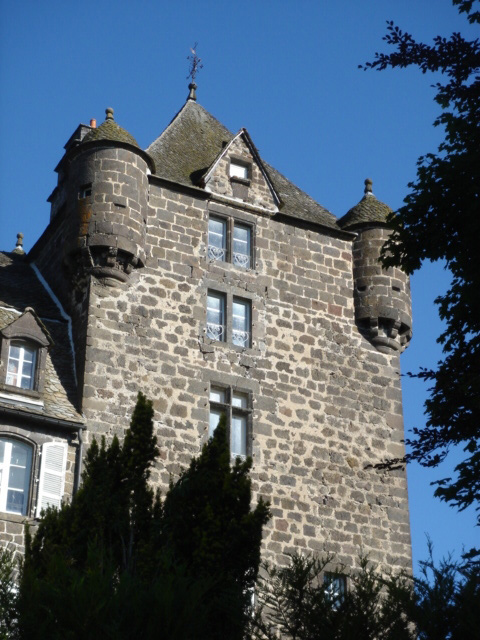 Location: Vic-sur-Cère, in the Cantal departement of France (Auvergne Region).
Built: 15th century.
Condition: In good condition.
Ownership / Access: Private.
Notes: Château de Comblat is a medieval castle located in Vic-sur-Cère in the Cantal. It is listed as a historic monument since 18 November 2002 and has a remarquable park. It was during three centuries, from 1586 to 1789, the house clerks and deputy bailiffs, responsible for ensuring the pacification of Upper Auvergne. The castle consists of a tower of the fifteenth century, rebuilt in the sixteenth century, which was contiguous to the commencement of the eighteenth century, a south wing of classic style building with interiors of the same period. It was probably at that time that were built outbuildings: chapel, gazebo, common, and the park with its terraces and its basin. The castle is protected in full, including its interiors with their decorations (monumental fireplaces, paneling, fireplaces eighteenth century with painted piers) including including the old kitchen (ground floor of the dungeon), the archive room (last level of the North Tower), the entrance hall and staircase, the first floor rooms and all the outbuildings including a garden pavilion with its painted decoration, the common, the chapel and gardens with their terraces, pond and fountain.