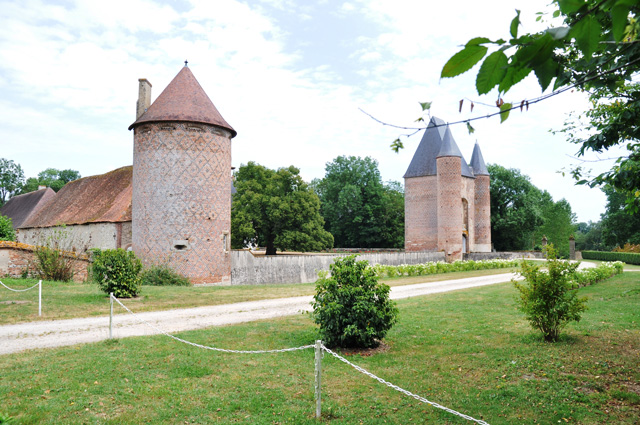 Location: Villeneuve-sur-Allier, in the Allier departement of France (Auvergne Region).
Built: 15th century.
Condition: In good condition.
Ownership / Access: Durye family.
Notes: Château du Riau is a castle located in Villeneuve-sur-Allier, France.The castle itself is the fifteenth century, as the entrance porch in the yard; today they are slated. Common are the sixteenth and seventeenth centuries; their coverage, as well as the loft polychrome brick that is in their extension is tiled. The whole is surrounded by moats; moat draw a quadrilateral occupied by a large courtyard in the middle of which stands a linden tree; are common along the northwest side of the quadrangle, while the castle is on the corner and is the entrance porch to the south corner. Inside the castle is a collection of paintings by Emmanuel The Villéon (1858-1944), one of the last impressionist painters. Emmanuel de La Villéon was the maternal grandfather of Madeleine Collard, wife of Pierre Durye. Away from the castle and outside the enclosure formed by the moat, the Tithe Barn is a striking building with its half-timbered facades filled with polychrome brick and timber signed by the master carpenter Nicolas Roger in 1584.Charles Butterfly, officer of the Dukes of Bourbon, had built the castle in the fifteenth century instead of a small castle belonging to the previous century Anne of France. The castle was bought in 1826 by Pierre Le Roy de Chavigny (1783-1866), prefect of the Allier under the Restoration; his daughter Matilda inherited and transmitted by marriage to Durye family, who still owns it. It belonged Durye including Pierre (1920-1996), chief curator at the National Archives. The building is registered as historical monuments in 1946 and 1991, and ranked in 1977.

How To Get To Château du Riau (Map):