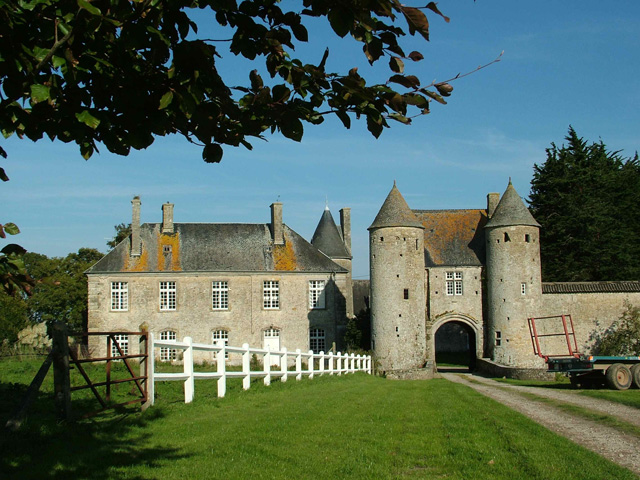 Location: Amfreville, in the Manche departement of France (Basse-Normandie Region).
Built: End of 15th century.
Condition: Partially Ruined.
Ownership / Access: The chateau is investigated a registration in respect of historical monuments since March 30, 1965.
ISMH Reference Number: PA00110319
Notes: Château d'Amfreville is a former stronghold of the late fifteenth century dramatically transformed in the eighteenth century, which stands on the town of Amfreville in the department of Manche Basse-Normandie region. His foundation could date back to the time of William the Conqueror. The castle is the subject of a registration as a historic monument by decree of 30 March 1965. The foundation of the castle dates back to the Middle Ages visibly. In 1189, the lord of Amfreville was Richard de Reviers, lord of Vernon and Néhou. He is the founder of the Abbey of Montebourg nearby. In 1226, "Amfrveille" belonged to William of Reviers. She fell into the hands of the Avenel family, who also owned the barony of Biards in Avranchin: Amfreville and Biards remained in the family until 1503. Amfreville then entered the family heritage of Tardes, then in that of the lafamille Poërier Portbail (Portbail lords), and finally Davy originating in Périers area. The lordship of Amfreville was built in the seventeenth century marquisate in favor of Charles-François Davy Amfreville, lieutenant general of the armies of Louis XIV, and comrade in arms of the Count of Tourville in the battle of the Hougue. In 1789, the lordship and castle belonged to the family of Mesnildot. The set consists of two platforms: one moated castle with itself and the other carrying small farm buildings whose moats were filled. The enclosure "high" false quadrangular, is currently surrounded by a moat and partially follows the shape of almond castrale platform. Remain here and there some medieval remains but overall, the house and outbuildings have been rebuilt or redesigned in the eighteenth century.