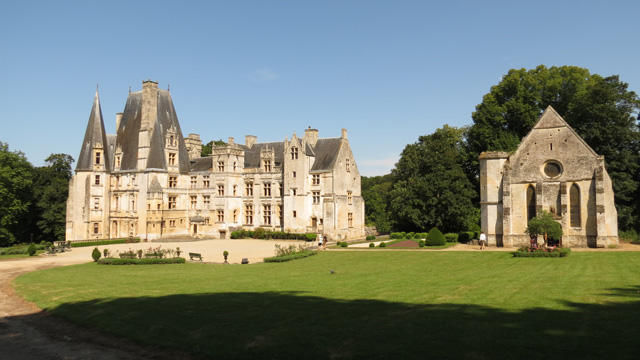 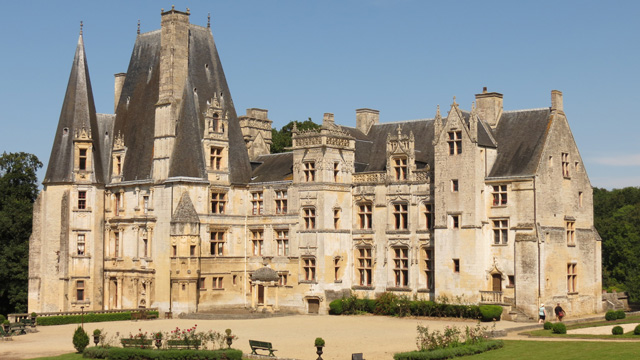 Location: Fontaine-Henry, in the Calvados departement of France (Basse-Normandie Region).
Built: 1530s.
Condition: Remodeled.
Ownership / Access: Marquis Oilliamson.
ISMH Reference Number: PA00111341
Notes: Château de Fontaine-Henry is a Renaissance castle located in the town of Fontaine-Henry, in the French department of Calvados, in the Basse-Normandie region. The Château de Fontaine-Henry is a historical monument by order of 5 April 19242. This ranking is replaced by a new decree on November 22, 2011. On its western façade of the castle of Fontaine-Henry can see the different styles employed, which reflect the evolution of architecture in Normandy and France. The first simple Gothic is indeed soon replaced by the Gothic and by the first French Renaissance. But the most curious element of the castle is on the left of this facade. One can indeed notice a superposition of columns, an inscription precisely date 1537, which seems to be remarkably early for such an achievement. Over 15 meters high, the roof surmounting the building, is considered the highest in France. This castle, work of Jean d'Harcourt, lord of Fontaine-le-Henri and his son Pierre d'Harcourt, Baron de Briouze, was remodeled in the eighteenth and nineteenth centuries on its facade. It is now surrounded by an English park, a historical monument in 19593. The castle, fully furnished, and still inhabited, houses a remarkable collection of paintings made during the Revolution. Paintings by Nicolas Mignard, Rubens, Titian, Correggio or adorn the walls of living rooms.

How To Get To Château de Fontaine-Henry (Map):