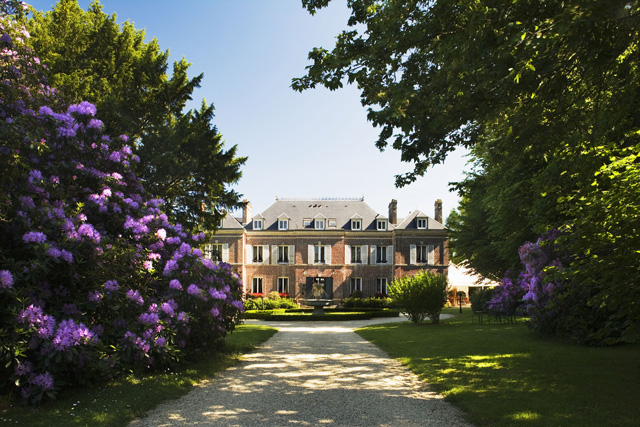 Location: Cambremer, in the Calvados departement of France (Basse-Normandie Region).
Built: 13th century.
Condition: Extensive renovations.
Ownership / Access: Sold in 1992, when the castle was converted to accommodate guests.
Notes: Château les Bruyères Cambremer is located in the Pays d'Auge, on the route of the road cider in the heart of Normandy meadows and stables. Sold in 1992, when the castle was transformed to accommodate guests, the castle very necessitated extensive renovations in strict compliance with the existing architecture. Only plaster siding with lime disappeared to reveal the apparatus of brick facade, the roof was rebuilt identically, and the facades of the manor. In 2004, the revised park, was completed with a home orchard, a vegetable garden, a garden of condiments and aromatic plants, and a new orchard intended to produce cider castle. The keynote porch was rebuilt, and a new gate was installed to complete the alignment of the majestic driveway leading to the castle. The small stud which occupies the buildings located behind the castle, complete the set. The "French saddle" horses for the show jumping competition. The most standout stud competition under the saddle of a high-level rider, and participates in numerous international competitions in Europe.

How To Get To Château les Bruyères (Map):