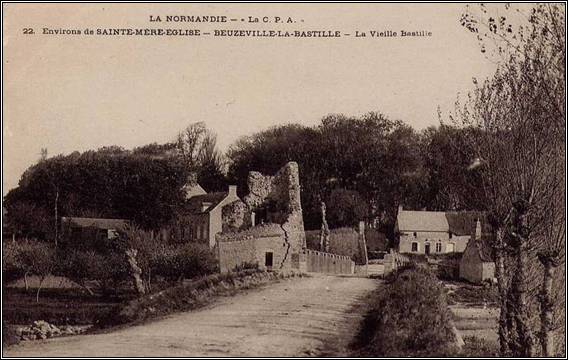 Location: Beuzeville-la-Bastille, in the Manche departement of France (Basse-Normandie Region).
Built: 14th century.
Condition: Destroyed.
Ownership / Access: --
Notes: La Bastille is an old fortified tower, nineteenth century, the remains of which stand in the town of Beuzeville-la-Bastille in Cotentin, in the department of Manche Basse-Normandie region. It served to protect fording the river. It is not known the date on which it was built: in 1330, as part of the coastal defense plan; or in 1374, during the siege of Saint-Sauveur-le-Vicomte. The book would have been attested from 1361 and built by Charles the Bad. On October 16, 1374, in Saint-Lô, "order given by the Commissioners of the King in Normandy to raise two-thirds of fouages ​​for one year, to defend Pont l'Abbé and the walled town of Beuzeville and hunt enemies the country "5. In 1376, in an act, Jean de Vienne takes Bastille Beuzeville. Shortly after the lord of La Ferte up there ten armed men. In 1449, she was taken to the English. A small garrison defends after the war of Hundred Years. At the beginning of the Revolution, it is still standing and there stands guard in 1792 and made a fire in the fireplace. It was destroyed in 1928. It was a kind of big square tower from just under 7 meters wide which was a small courtyard surrounded by low walls forming a Greek cross. It was built on oak piles, which was observed during the construction of the bridge. In the apartment was the fireplace or at noon, you could see the grooves that were used to move the chains of the drawbridge. On the same side, one could see masonry remains of a bridge pier, because part of the river happening on this side, hence its position on an island. She was about 10 meters high, a platform roof, protected by a parapet. These openings were square.

How To Get To La Bastille (Map):