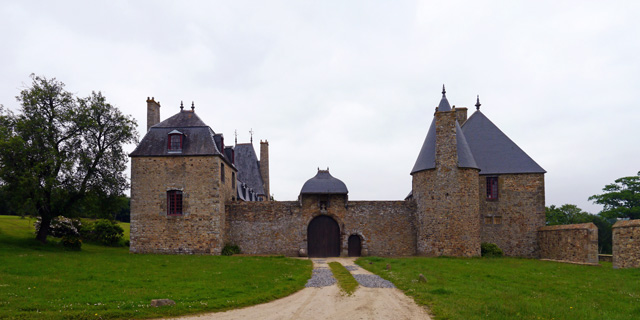 Location: La Haute-Chapelle, in the Orne departement of France (Basse-Normandie Region).
Built: 16th century.
Condition: Restored in 1991.
Ownership / Access: Open throughout the year.
Opening Times: Check their website for more info.
Price of Admission: Free.
Notes: The mansion Chaslerie is a building of the fifteenth, sixteenth, seventeenth and eighteenth centuries located in La Haute-Chapelle, France. The old castle, but ranked games, is registered as a historic monument since November 2, 1926, the old driveway of the mansion since 26 October 1993. The porch with its dome at the Imperial, facades and roofs including manor house and two corner towers, and the three buildings that make her face (Pavilion seventeenth century and its access staircase, old stables of the eighteenth century dovecote flag of the eighteenth century) The courtyard with its boundary walls and its basin, the chapel, with its interior decor, the terrace located east of the manor supporting the old garden with its walls and retaining fence, a moat and reach located the northeast and the forebay angle are classified since 4 July 1995. The public can visit for free outside the house all throughout the year. The interior can also be visited, but by groups and by appointment .. Since 1991, restoration work has mainly covered the retirement of waters of homes and the rehabilitation of the surroundings, different retaining walls around (especially around the Pournouët and in the front courtyard mansion) has long served quarries to cash farm tracks. The interior of the buildings should be renovated, rehabilitated and restored gradually, in a later phase of work. The restoration of the mansion finials is made according to the models and canons of the ancient pottery of Ger, which ceased production in the early twentieth century.