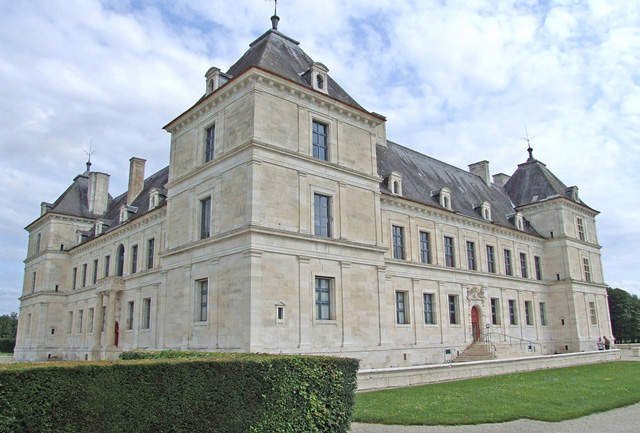 Location: Ancy-le-Franc, in the Saône-et-Loire departement of France (Bourgogne Region).
Built: 1544.
Condition: In good condition.
Ownership / Access: Currently owned by Paris investing company SAS. Open to visitors.
Notes: The Château d'Ancy-le-Franc is a Renaissance castle of the sixteenth century located in the town of Ancy-le-Franc in the French department of Yonne.The architecture of the castle is the result of the meeting between Antoine de Clermont and Sebastiano Serlio. Indeed, although the architect is Italian, he was able to use the fruits of French tradition. The castle is built on a central plan and square. Four house forming a square are each flanked by a projecting roof at the corners. This plan builds on the plans called "pi" widely used in France at that time. Serlio separated the two levels of elevations by a wide ledge upon which the second level berries. The architect has used for the first level the Tuscan order and the second level the Doric order. On both levels, the berries are framed engaged pilasters. Be aware that until the seventeenth century, a span of only two was open. Serlio wanted to create a rhythm alternated between open windows and blind spans. To the front of the courtyard, Serlio used in the Corinthian order first level and second level the composite order. Again, he wanted to play at a pace alternated between open windows and niches framed by pilasters. These niches are adorned with a shell inside. Serlio opened a triple arcade on the ground floor which is reminiscent of the Villa Madame. Serlio was able to pander to sponsor the building of overcoming a very steep roof as the Château de Villandry and he used limestone of Burgundy. Inside the castle includes murals after Primatice drawings or Niccolò dell'Abbate, coffered ceilings, intricately carved woodwork, colorful ornaments.