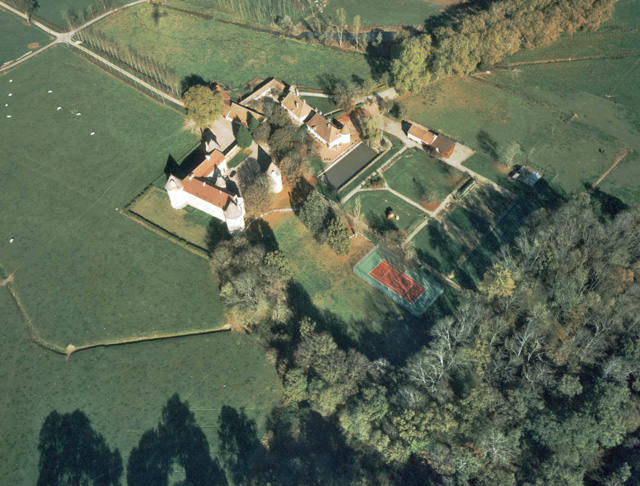 Location: Vindecy, in the Saône-et-Loire departement of France (Bourgogne Region).
Built: 15th century.
Condition: In good condition.
Ownership / Access: Private. Not open to public.
ISMH Reference Number: PA00113528
Notes: Château d'Arcy is an ancient castle, the twelfth century, rebuilt in the fifteenth century, the center of the manor and the marquis d'Arcy, which stands on the Common Vindecy in the department of Saône-et-Loire, in Bourgogne region. The castle is the subject of a partial inscription as historical monuments by order of 27 June 19831. Only the facades and roofs of the two buildings with input turn, the entrance gate between the two buildings, facades and roofs of the main building, the wing back and the tower are enrolled. Despite numerous changes the castle has preserved many elements of the fifteenth century. The old castle consisted of a quadrangle flanked by circular towers in gray sandstone which leaned against the west of an elongated rectangular main building and north now defunct gallery; a stair tower is leaning against the facade of the main building. From the old farmyard, there are two small buildings flanked to the south and north of two round towers. The ditches were filled during the Revolution.

How To Get To Château d'Arcy (Map):