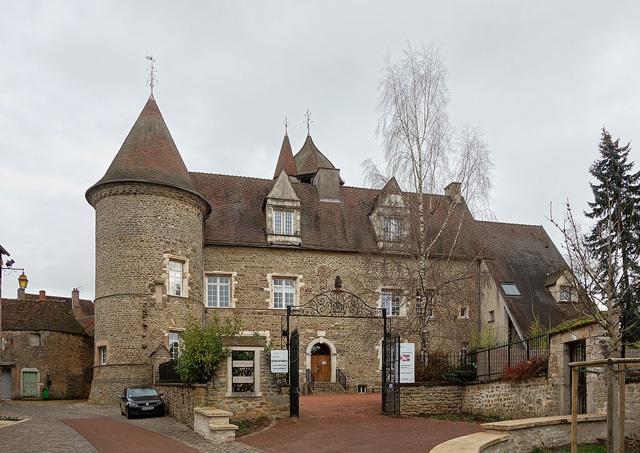 Location: Arnay-le-Duc, in the Côte-d'Or departement of France (Bourgogne Region).
Built: 15th century.
Condition: In good condition.
Ownership / Access: Now houses the Pierre Meunier educational center.
ISMH Reference Number: PA00112063
Notes: Château d'Arnay-le-Duc or former mansion of Juilly or old castle of the Princes of Condé, is a sixteenth century castle, located in the village of Arnay-le-Duc in the department of Côte-d'Or . It now houses the educational center Pierre-Meunier. The Pierre Meunier educational center is located at the edge of Morvan and Auxois. It is completely encompassed in a residential block bounded by Castle Street, the alley of the castle, street-Lucienne and John Barnet (RD 17), the rue des Ursulines and Rue Saint Honore. The entrance is west facade with an outdoor courtyard on the street side of the castle, via a gate marked ironwork uppercase PMT, vestige of limerie Proutat-Michot-Thomeret. A round tower with a conical roof occupies the north west corner (left side opposite the entrance), what was a main building. This facade has retained its mullioned windows and braces, and two dormers pilaster Corinthian entablature decorated with foliage. A polygonal tower roof at the appointed imperial tower Margaret of Burgundy, or tower of the lantern is in the middle position on the eastern façade. It has about 120 steps in two flights. It faces another court. From its peak, one has a view of 360 °. The buildings are arranged at right angles on two levels, plus an attic. The roof is small flat tiles and the highest elevation is that of polygonal tower. A vehicle access is via the RD 17, and overlooks a south renovated contemporary facade, pierced with seven windows. The north wing handles dependencies. Almost nothing remains of the original interior elements, and the place is dedicated to teaching. The castle was registered historic building 26 May 19262. It can be visited only during the Heritage Days, only one enters a room and the polygonal tower.