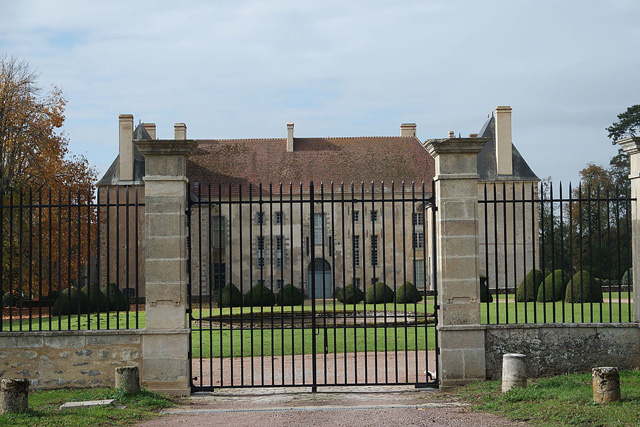 Location: Aunay-en-Bazois, in the Nièvre departement of France (Bourgogne Region).
Built: 16th century.
Condition: In good condition.
Ownership / Access: Privately owned.
ISMH Reference Number: PA00112797
Notes: Aunay Castle is an ancient castle medieval fort became Castle accreditation in the sixteenth century. It is located in the town of Aunay-en-Bazois in the Nièvre, Morvan region. It remained the property of the counts of Aunay until 1963 . The stronghold of Aunay is in Pioche family until the mid-sixteenth century. At first, the lords of living in the part of the castle which took the name of "low Box" after a fortress called "top box" had been built in the second half of the fifteenth century. This was damaged during the wars of religion, while the lower box was completely destroyed. Top box was dramatically transformed in the seventeenth century, including Jacques-Louis Mesgrigny, Count of Aunay who, in 1680, married Charlotte Hajnal, the eldest daughter of Marshal Vauban. The Mesgrigny succeeded, in 1738, Louis Le Pelletier Rosambo. The latter married the daughter of Jean-Charles de Mesgrigny, Aimee Mesgrigny, who brought him a dowry of all goods Mesgrigny. His descendants were to hold Aunay until 1963. Currently, the Bourgoing family owns the castle, which is not open to public.

How To Get To Château d'Aunay (Map):