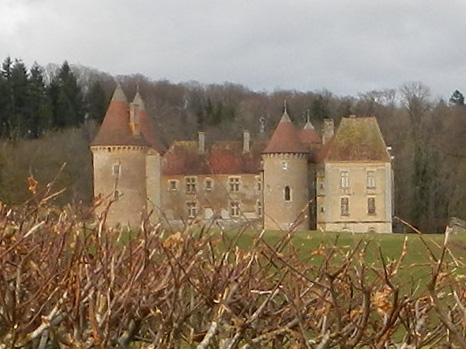 Location: Saint-Émiland, in the Saône-et-Loire departement of France (Bourgogne Region).
Built: 12th century.
Condition: In good condition.
Ownership / Access: Privately owned. Not open to public.
ISMH Reference Number: PA00113427
Notes: Château d'Epiry is located in the municipality of Saint-Émiland in Saône-et-Loire, on the hillside, away from the village. The castle has preserved medieval times four round towers and a main building which indicate the polygonal plan of the ancient castle fort orderly around the yard; the wall, originally closed this court, was replaced by a gate, flanked by two stone lions, which is accessed by a bridge over the moat still visible. The four round towers could date of the fourteenth century. North West tower has retained three bretèches stone carefully paired spread against each other so as to dominate the castle entrance angle. The tower southeast contains the chapel of the fifteenth century, adorned with a flamboyant decor pool and antique stained glass windows had to be baptized and where Roger de Rabutin. The main building holds the fifteenth century, between the two towers, the north side of the court. The exterior is quite austere, that of the court is more ornate. Towards the east, a large main building closes the courtyard, opposite the entrance; the date of its construction is included in the tympanum of the door 1717. The central part, marked his full height by shear walls, crowned by a triangular pediment pierced by an oculus. to the park, main building offers a wide facade same character that develops beyond the medieval towers. The central part is topped by a triangular pediment. It ends at the ends by two slightly protruding front building, whose angles are underlined by partition walls. The castle is privately owned and not open to visitors. It is the subject of a registration as a historic monument since 31 October 1975.

How To Get To Château d'Epiry (Map):