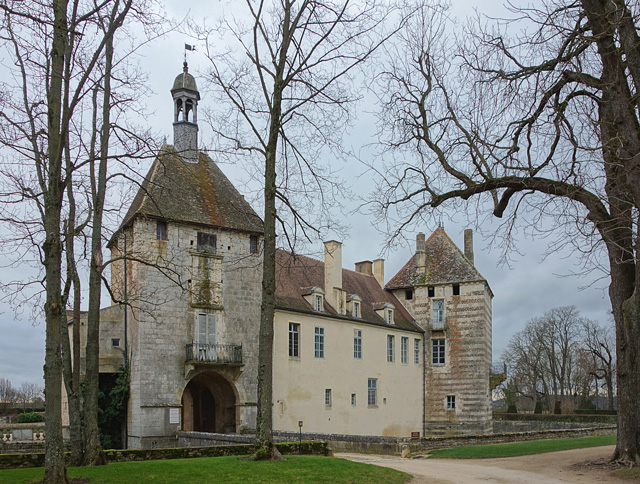 Location: Époisses, in the Côte-d'Or departement of France (Bourgogne Region).
Built: 13th century.
Condition: In good condition.
Ownership / Access: Owned by an association.
Opening Times: Open outdoors all year and in July and August inside.
ISMH Reference Number: PA00112444
Notes: Château d'Époisses is a castle in France, located in the village of Epoisses, in Côte-d'Or. Castle of Epoisses has since been preserved by family continuity. Open outside all year and in July and August within. Located in the village center, the Castle of Epoisses is composed of a large building flanked by two small wings and big towers with a square base. A beautiful flower garden, surrounded by a double ring of fortifications with a moat surrounds the whole. On the outer wall of watch towers stand out. In the castle park, are also noticing a church which became the parish church of the village (with a mural representation of The Three Dead Kings: three young gentlemen are arraigned in a cemetery with three deaths, which they recall the brevity of life and the importance of the salvation of their souls) and a dovecote beautiful seventeenth century, with a rotating ladder and nearly 3,000 bearers (or niches). The moats, bridges, both speakers and the ground and all buildings between the speakers, addictions, the church and the castle were classified historic monument June 12, 1992. The park is a listed site since February 22, 1946.

How To Get To Château d'Époisses (Map):