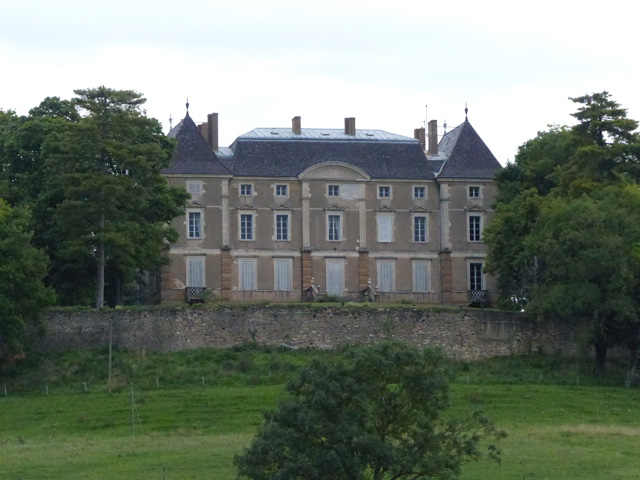 Location: Chapaize, in the Saône-et-Loire departement of France (Bourgogne Region).
Built: 11th century.
Condition: In good condition.
Ownership / Access: Private property and not open to visitors.
Notes: Château d'Uxelles is located in the municipality of Chapaize in Saône-et-Loire, at the tip of a spur overlooking the entire region.The castle consisted of two concentric elliptical speakers. The first, whose walls 2.65 meters thick ramparts defended by a parapet with battlements were devoid of any flanking body was preceded by a ditch and counterscarp and included four gates: the gate principal in a square tower out work which preceded a drawbridge, a small door in another much smaller square tower and two water gates opened in the curtain. Common, rebuilt in the eighteenth century, were backed by wall side of the main entrance; a chapel dedicated to St. George was built in the courtyard, probably at the end of the thirteenth century. The second enclosure was flanked by four towers and provided in its eastern part at least, discovered without buttress battlements with parapets on arches. Part of the battlements had been deleted in the fifteenth century or early sixteenth century, when the walls were raised and applied against them home and common. Northeast, a square tower straddling the wall was pierced on the ground floor of a door arched in rusticated. Two round towers of varying importance were located east and west, a rectangular tower, tower called Colombier, southeast. This chamber was divided into four parts: the first small courtyard in which stood a big pentagonal tower of seven floors, the courtyard around which ordered the common and the south main building flanked by the body a trapezoidal staircase tower, a narrow courtyard surrounded by various buildings that flanked the large round tower was going to be the primitive tower to the west, and finally a southwest terrace. All this disappeared to make way for a rectangular plan of the main building lying between two wings slightly advanced bracket back on both fronts. The front building is crowned by a central arched pediment.The castle, private property can not be visited.

How To Get To Château d'Uxelles (Map):