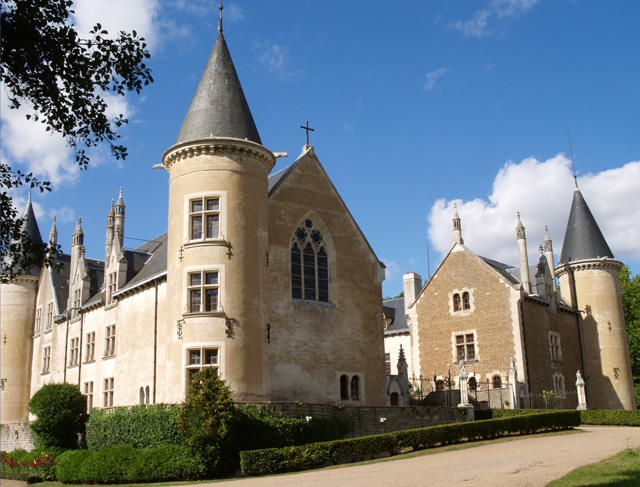 Location: Vic-de-Chassenay, in the Côte-d'Or departement of France (Bourgogne Region).
Built: 14th century.
Condition: Restored.
Ownership / Access: Privately owned.
ISMH Reference Number: PA00112778
Notes: Château de Bourbilly is a castle of the nineteenth century, in the town of Vic-de-Chassenay, Côte-d'Or. Charles de Franqueville, son of Cecile Belle de Caux and new owner of the estate, began a complete restoration of the building between 1867 and 1871. The chapel, partially destroyed by fire, was restored in 1952, through collective participation : the family, the sculptor Yencesse, the medievalist Surchamp for the fresco of the Visitation, and the master glassmaker Wending for stained glass. The castle was provisionally registered on the list of historic monuments of 18622. It will definitely be on the list of historic monuments in France by a decree of 19 March 1992. The castle, restored in the Second Empire, in his noble bearing Park with its three wings at right angles, confined round towers, and its high roofs on which stand beautiful cylindrical chimneys. Inside visit to the guard room with a Louis XIII billiards and Flemish tapestry dating from the seventeenth century. The castle library is made of wood neo-Gothic embodying a portrait of St. Jane de Chantal by Philippe de Champaigne. The park was expanded and redesigned by Alphand, under the control of Ernest Franqueville. In 1869, the latter as Chief Highways, quotté runs the route, the leveling, plumbing work and new plantations. He received the Outstanding Garden label.

How To Get To Château de Bourbilly (Map):