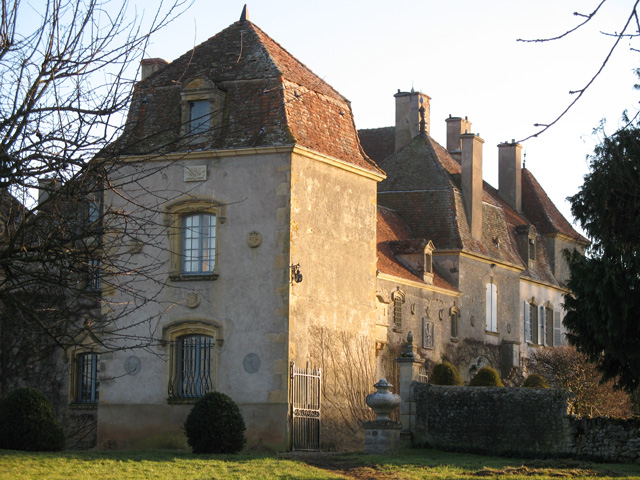 Location: Oyé, in the Saône-et-Loire departement of France (Bourgogne Region).
Built: 1770.
Condition: In good condition.
Ownership / Access: Privately owned.
ISMH Reference Number: PA00113423
Notes: Château de Chaumont is located in the town of Oye in Saône-et-Loire in France. It is classified in the supplementary inventory of historical monuments (ISHM) 1 and its garden is labeled Remarkable Garden. The castle, U-plane has a central body flanked on the corners of its external facade, two square towers and those of its front courtyard, two large pavilions that extend two wings at right angles. These wings are themselves each supplemented by a flag set on their outer corner. The building of the fifteenth century from Moulin-l'Arconce, was rebuilt in the alignment of the main body. An alley stretches between flower beds dotted with clipped yews, centaurs ridden by mating and ornamental vases. A grid conceals a hedge cut into triumphal arch. Grassy lawns in a park decorated carved statues and shrubs all around. The castle is privately owned. The great hall, chapel and park are open to the public in August.

How To Get To Château de Chaumont (Map):