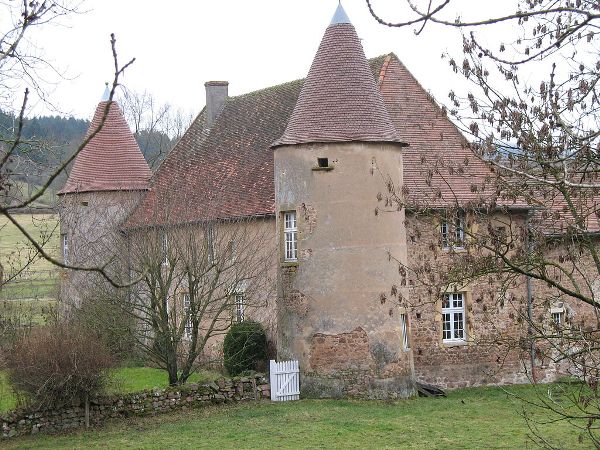 Location: Saint-Racho, in the Saône-et-Loire departement of France (Bourgogne Region).
Built: 16th century.
Condition: Restored.
Ownership / Access: Privately owned.
ISMH Reference Number: PA00113456
Notes: Château de Chevannes, is a former stronghold, the fourteenth century, which stands on the town of Saint-Racho in the department of Saône-et-Loire, in the Bourgogne region. The castle is the subject of a partial inscription as historical monuments by order of 15 February 19771. Only the facades and roofs are enrolled. The castle today features a U-shaped plan around the courtyard. The main building, of elongated rectangular plan, is flanked by two round towers topped with pepper. Two wings, dependencies uses, at right angles are supported at both ends of the facade. The south wing consists of two overlapping open galleries. The north wing contains a barn, stables and a bread oven. Originally, the fortified house moated adopted a quadrangular; the northeast wing and towers have been razed after the revolution.

How To Get To Château de Chevannes (Map):