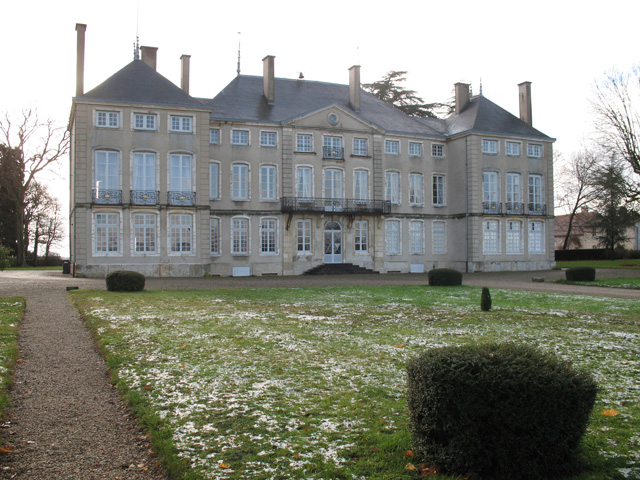 Location: Demigny, in the Saône-et-Loire departement of France (Bourgogne Region).
Built: 18th century.
Condition: In good condition.
Ownership / Access: Privately owned. Open to public as a Museum.
ISMH Reference Number: PA00113265
Notes: Château de Demigny is located in the town of Demigny in Saône-et-Loire, on a terrace overlooking the village. The old fortress was in the shape of a quadrangle flanked by towers which the inhabitants had to watch and guard; it undergoes major remodeling in the late eighteenth century. On its site are built outbuildings that house in particular a press wheel to 1777. The present castle consists of a main building elongated rectangular plan, flanked by two rectangular pavilions overhanging work off the east and set back on the West facade facade. A front building stands slightly advanced in the center of each façade. Only the eastern one is confined by a pediment. Inside, a staircase with two straight flights is surrounded by a wrought-iron railing adorned letters FOUDRAS and the monogram of Marie Antoinette Schlegenberg. The entrance gate and its two pillars, the northern facade and interior staircase wrought iron railing were listed historic monument December 9, 1983 and all the facades and roofs of the castle and outbuildings housing the press (and press itself) and the castle park were listed historic monument June 5 20021 The castle is privately owned. It is open to the public who can discover a museum dedicated to hunting, game hunting and work of the Marquis de Foudras.