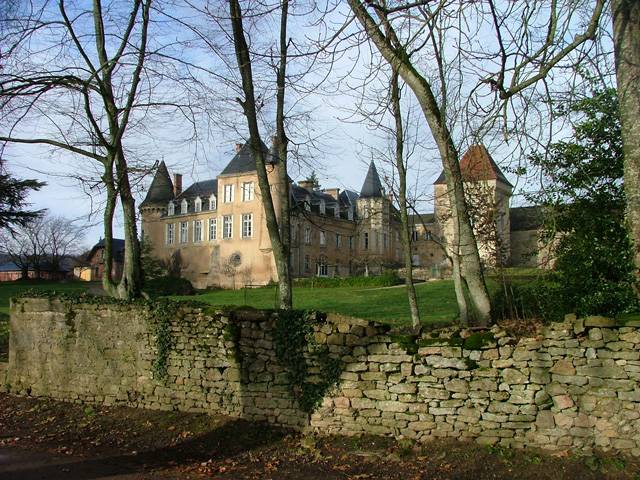 Château de Dracy-lès-Couches Photo - TL — I have taken this photo myself - Wikipedia - lic. under CC BY-SA 2.5

Location: Dracy-lès-Couches, in the Saône-et-Loire departement of France (Bourgogne Region).
Built: 1298.
Condition: In good condition.
Ownership / Access: Privately owned. The visit of the cellar is allowed.
Notes: Château de Dracy-lès-Couches is located in the municipality of Dracy-lès-Couches in Saône-et-Loire, in slope flank. The primitive fortress included a vast quadrangle of buildings surrounding a square keep. The north and east sides were killed or greatly reduced in the late nineteenth century. The courtyard is so wide open onto the park, highlighting the dungeon and the round tower of the fifteenth century which ends the long building remained intact cellar. The other buildings forming the west wing were processed externally in accordance with the criteria of taste in fashion in the nineteenth century, where a profusion of various elevations of buildings, towers, turrets, roofs of all shapes and dormers high gables. The castle is privately owned. The visit of the cellar is allowed.

How To Get To Château de Dracy-lès-Couches (Map):