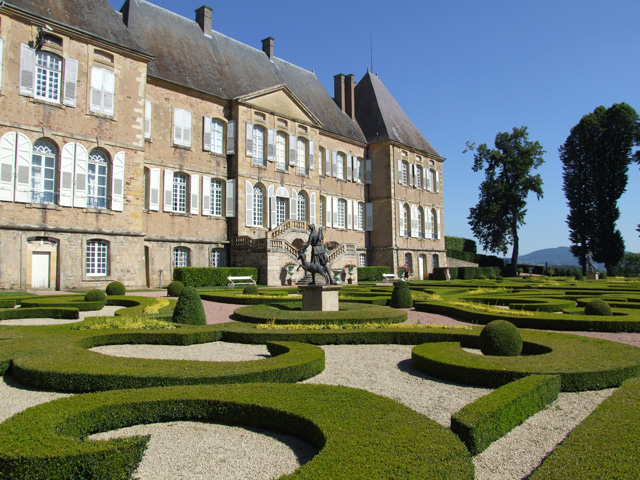 Location: Curbigny, in the Saône-et-Loire departement of France (Bourgogne Region).
Built: 1620.
Condition: Restored.
Ownership / Access: Privately owned. Open to public.
Opening Times: Check their website for more info.
Price of Admission: Check their website for more info.
ISMH Reference Number: PA00113261
Notes: Château de Drée is located in the municipality of Curbigny in Saône-et-Loire, on a gentle slope at 1500 meters from the village. The building is composed of three rectangular U-shaped body and flanked by pavilions. The center of the eastern facade of the main building is occupied by a pre-formed body of three bays on the ground floor, beyond a level of five steps, a portico consisting of two rows of four Attic columns bases and capitals of confined animal heads, which support a stone balustrade balcony where open between decorated columns with foliage, three rectangular French windows. Above them, a strongly protruding corbels reign cornice topped by a low wall crowned by a cartouche with the arms of Tournon-Simiane (quartered: 1 and 4 to Azure gold lilies, party Gules to the lion, 2nd and 3rd seeded towers and golden lilies) between two crouching lions faced. The north and south facades of the eastern two pavilions are slightly advanced on the wings, they flank the ends. The western facade facing the park is stripped, the central front building is crowned by a pediment. The interior contains, among others, a large living room with white wood paneling and ceiling are decorated with rustic trophies, bouquets and rococo flower garlands. The castle is privately owned. It is open to the public. The castle, its common and the two octagonal pavilions at the entrance of the park are listed historic monument since June 3 19593. The gardens to the terraces French have made the label "Remarkable Garden".

How To Get To Château de Drée (Map):