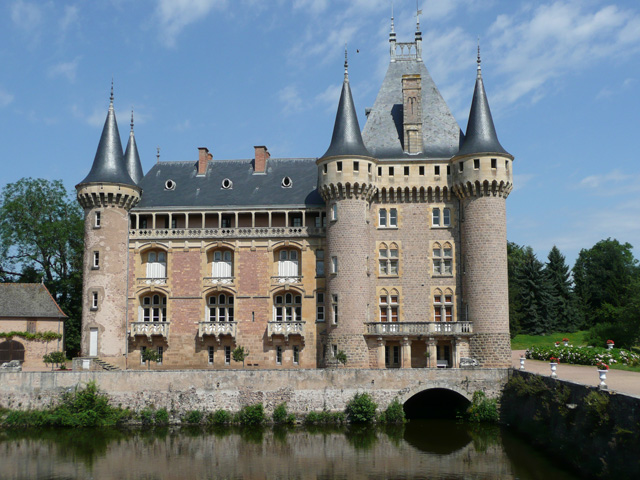 Location: La Clayette, in the Saône-et-Loire departement of France (Bourgogne Region).
Built: 14th century.
Condition: In good condition.
Ownership / Access: Privately owned. Not open to public.
ISMH Reference Number: PA00113218
Notes: Château de la Clayette is located in the municipality of La Clayette in Saône-et-Loire, in the town center, on the edge of a pond. Surrounded by water, the castle occupies a platform irregular rectangular plan. Public buildings consist of two parallel rectangular plane each with an angle turret overhang. In the center of the North Building, rises a square tower, which backs onto a stair turret. The south building is flanked by a round tower which draws a circular staircase tower. The castle itself occupies the eastern part of the enclosure. It consists of a rectangular main building leaning against a large square tower. South of the main building, the walkway was built gallery. At right angles, the remaining buildings of the eighteenth century: another main building and in the same alignment, a pavilion. To the east, a road that runs along the facades, connects the castle to a fortified gate, formed a square tower pierced with a cart door. The castle is privately owned and not open to visitors. With its moat connected to a lake of 30 hectares, and its park, it boasts multiple protections under historiques1 monuments rank in 1946 to the front door, the water gates, facades and roofs; ranking in 1950 for the chapel; Registration in 2002 the rest of the castle.

How To Get To Château de la Clayette (Map):