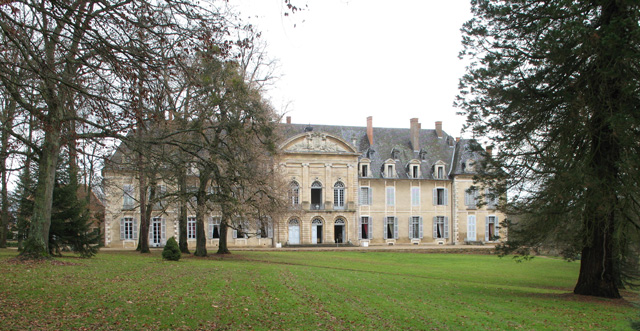 Location: Saint-Ambreuil, in the Saône-et-Loire departement of France (Bourgogne Region).
Built: 1682.
Condition: Restored.
Ownership / Access: Privately owned. Open to public.
Notes: Château de la Ferté de Saint-Ambreuil is a French château located in the municipality of Saint-Ambreuil in Saône-et-Loire, near Grosne. Although the original purpose of this building was to serve before the French Revolution, of abbey home of the Abbey of La Ferte, destination since that time and the disappearance of the religious buildings now used to count among the castles of the region. The construction includes a long rectangular building, flanked at both ends of its west facade of two somewhat higher pavilions. At the center of this facade, stands a sturdy front building of three bays. The ground floor and the quoins, topped with vases with ornaments, are table boss. Ionic pilasters, whose bases rest on a ledge before determining each floor windows of a small support-body wrought iron balcony, rising from either side thereof and tables with drops that overcome until a thick entablature carrying a large pediment decorated with a cartouche surrounded by coils and foliage. English-style gardens were built in the location of missing buildings. The castle is privately owned. It is open to the public and is the subject of a classification as historical monuments since July 5, 1993.

How To Get To Château de la Ferté de Saint-Ambreuil (Map):