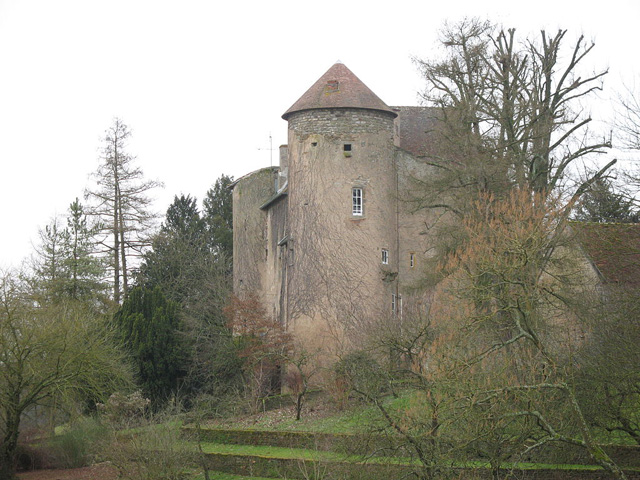 Location: Marcilly-la-Gueurce, in the Saône-et-Loire departement of France (Bourgogne Region).
Built: 12th century.
Condition: In good condition.
Ownership / Access: Privately owned. Not open to public.
Notes: Château de Marcilly-la-Gueurce, is a former stronghold, remodeled deeply, which stands on the town of Marcilly-la-Gueurce in the department of Saône-et-Loire, in the Bourgogne region. Castle and East terraces are the subject of a registration as a historic monument by decree of 22 March 1993. Several times changed since the twelfth century, the castle includes a large rectangular pavilion, flanked by a round tower at uncrowned talutée slightly basic. Leans against him, to align its eastern facade, a main building built in the sixteenth century on the site of a courtyard. Preceded east of a stone balcony resting on arches, is flanked by a round tower that has regained its conical roof and a truncated square tower, resulting from the transformation of an old circular tower, contains a spiral staircase.