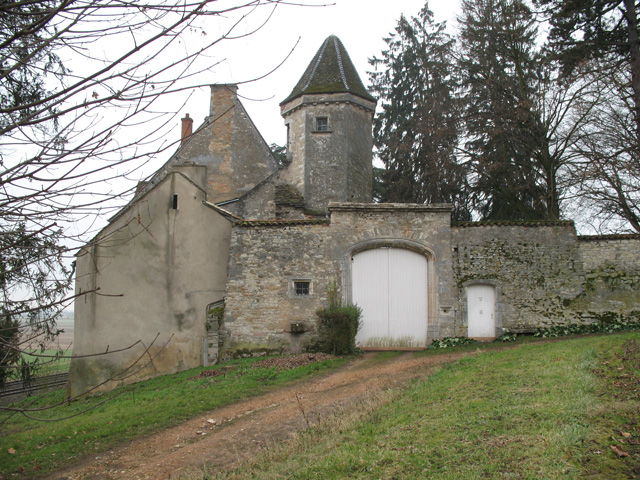 Location: Fleurville, in the Saône-et-Loire departement of France (Bourgogne Region).
Built: 13th century.
Condition: In good condition.
Ownership / Access: Privately owned. Not open to public.
ISMH Reference Number: PA00113278
Notes: Château de Marigny is located in the municipality of Fleurville in Saône-et-Loire, on a terrace overlooking the Saône. Residential buildings occupy the east side of a large courtyard surrounded by walls and flanked to the north and west of three round towers pierced gunboats, which is accessed in the south by a basket-handle door flanked by a pedestrian door. Agricultural use of buildings are based in the western curtain. The body of principal building, a square plan, is covered with a high gable roof. It is flanked, in the same alignment, of two wings. At the front of the north wing yard, backs onto a hexagonal tower in work crowned with an entablature supported by large corbels in quarter-round. The castle is privately owned and not open to visitors. It is listed on the Inventory of Historic Monuments since 1941.

How To Get To Château de Marigny (Map):