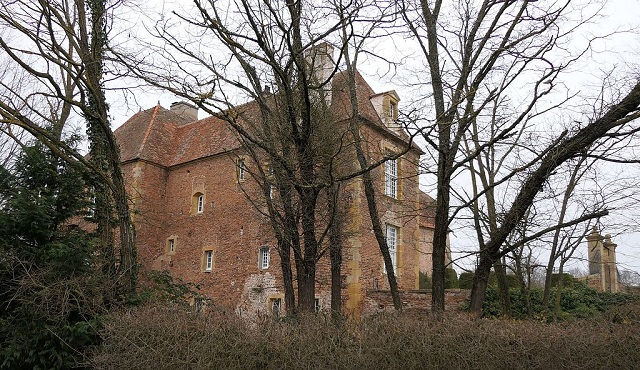 Location: Maulevrier, in the Saône-et-Loire departement of France (Bourgogne Region).
Built: 12th century.
Condition: Rebuilt.
Ownership / Access: Private property.
Notes: The castle of Maulevrier is an old castle, rebuilt in the sixteenth century, center of the seigneury then the marquisate of Maulevrier, which stands on the town of Melay in the department of Saone-et-Loire, in Burgundy-Franche-Comté region . The castle is the subject of a partial inscription under the historic monuments by decree of January 24, 1991. Only facades and roofs, including foundations, ditches, sleeping bridge, turning staircase and clear door Sixteenth century sieves are inscribed.From the eleventh century until about 1300 the land belonged to the abbey of Saint-Rigaud. In the fourteenth century, the family of Lespinasse built a hunting rendezvous, later transformed into a stronghold. In 1502, by marriage, the domain falls to John of the branch of Damascus de Macilly. In 1562, Philip of Damascus, son of John, was assassinated in the castle, which was then destroyed. In the second half of the sixteenth century, the sister of Philip, wife of Dionysius of Savary, undertook the reconstruction. Her heiress, Marguerite de Savary, completes the right wing, as evidenced by a marble plaque still visible in the building. In 1625, the land was erected as a marquisate for the brother of Marguerite, Francis of Savary, ambassador of Henry IV to Constantinople. He died in 1628 without posterity.The castle built entirely of brick consists of a U-shaped building consisting of a main body with a rectangular plan and two wings in return of square of unequal importance. The chapel was in the wing that was demolished in 1793. The main body, the left wing, and the massive square pavilion on which these two elements articulate, are covered with hipped roofs. The primitive windows, with stone crosspieces without moldings, were closed, probably in the seventeenth century, and replaced by large rectangular bays, several of which were blocked or modified. In the center of the facade, on the courtyard, is a door framed by pilasters surmounted by triglyphs bearing a modular entablature above which a curved pediment is rounded, decorated by a shield supported by two angels with outstretched wings. At the end of this façade, a semicircular door gives access to a passage vaulted with ridges.