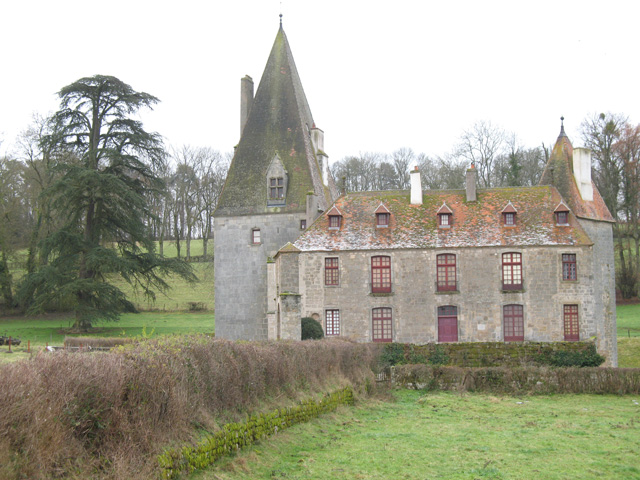 Location: Morlet, in the Saône-et-Loire departement of France (Bourgogne Region).
Built: End of 13th century.
Condition: Ruined.
Ownership / Access: Private property. Not open to public.
Notes: Château de Morlet is located on the town in Saône-et-Loire, in the hollow of the valley in which the village floor. It is the subject of a partial registration as a historic monument since June 27, 1984; the entire park and the castle was listed by order of 17 July 2014 has built consists of a main building between two unequal square towers; the eastern tower, topped by massive and very high roof, appears oldest. Braces windows or vertical mullions on the southern facade and towers are the fifteenth century. The windows of the north facade balconies have been redone in the eighteenth century. The castle was protected by a moat. Beyond the forecourt, stands the entrance pavilion that bears the date of 1584. The central building, which opens the door in semicircular arch flanked by a small side door and the square pavilions that frame are paired with bosses. This massive construction has defensive elements of a medieval castle: gunboats spread in all directions and battlements along the entire length of the building. But the influence of the Italian Renaissance brand in the style of these elements, especially the battlements which are presented as a frieze of medallions depicting lions' heads and are carried by small molded consoles. The polychrome marble adds to the decorative aspect of these ornaments. Marble cartridges above the door carry a Latin inscription, the PDM letters, and destroyed arms. A chapel was constructed in the mid-nineteenth century in the left pavilion. The castle is privately owned and not open to visitors.

How To Get To Château de Morlet (Map):