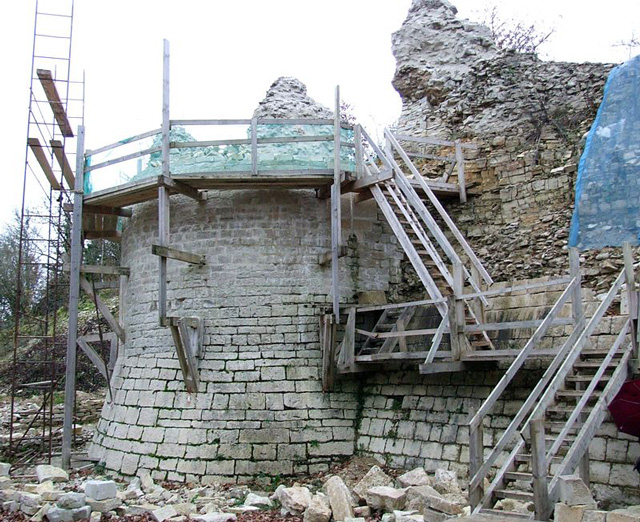 Location: Noyers, in the Saône-et-Loire departement of France (Bourgogne Region).
Built: 11th century.
Condition: Under restoration.
Ownership / Access: Open to visitors.
Notes: Castle of Noyers-sur-Serein is a medieval fortress located in Noyers, in the current department of Yonne. Built before the eleventh century by the lords of walnut trees, the castle was enlarged and fortified in the early thirteenth century by Hugues de Noyers, bishop of Auxerre. The key figure of the lineage of this powerful family is unquestionably Miles X Noyers, Marshal of France and adviser to the king. County walnut then goes for a century the Dukes of Burgundy and the castle is one of the keys to the duchy. Ownership of the Prince of Conde, leader of the Huguenot party, walnut becomes during the religious wars of the challenge of fierce fighting and seats between Catholics and Protestants and between Leaguers and royalists, before being destroyed in 1599 by order of King Henri IV . There remain only the ruins of what was, in the words of the historian Ernest Small, a "formidable fortress, one of the most considerable of Burgundy.