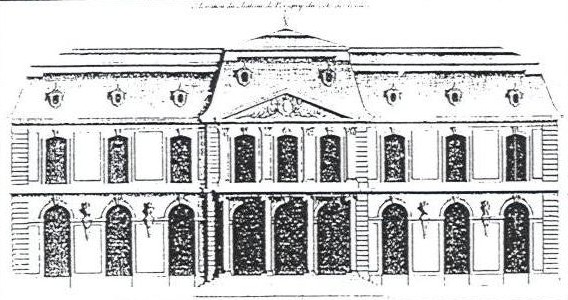 Location: Perrigny-lés-Dijon, in the Côte-d'Or departement of France (Bourgogne Region).
Built: 13th century.
Condition: Missing.
Ownership / Access: Private property.
Notes: Château de Perrigny-lès-Dijon, now disappeared, was located in the municipality of Perrigny-lès-Dijon in the department of Côte-d'Or, seat of an ancient manor dating back to the thirteenth century and in 1768 became County House strong in the beginning, it becomes a castle in the fifteenth century, before being modified in the eighteenth century sumptuous mansion. Places have belonged particular family of Perrigny, the Chancellor Nicolas Rolin and the Gagne family. They welcomed Pierre Bauffremont when No weapons of Marsannay (1443) and the last Duke of Burgundy Charles the Bold (1474). It was razed in the years following the Revolution. Current traces of the old castle and its outbuildings are still identifiable in the topography of the village. One can identify the remains of a door to the backyard (hinges), an oven and an ordinary press, now integrated into private property. The place name of some localities also recall the domain extension: "Le Petit Bois" original and made to agriculture in the 1770s, the "Alley" (towards the road of Dijon), the " Allée des Tilleuls "(to Domois, stately annex), the" Castle courtyard, "the" Turret ", the" Park ", the" Pavilion ", etc.

How To Get To Château de Perrigny-lès-Dijon (Map):