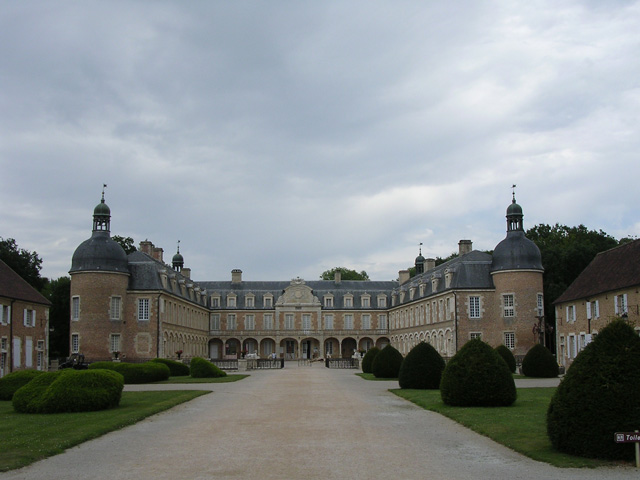 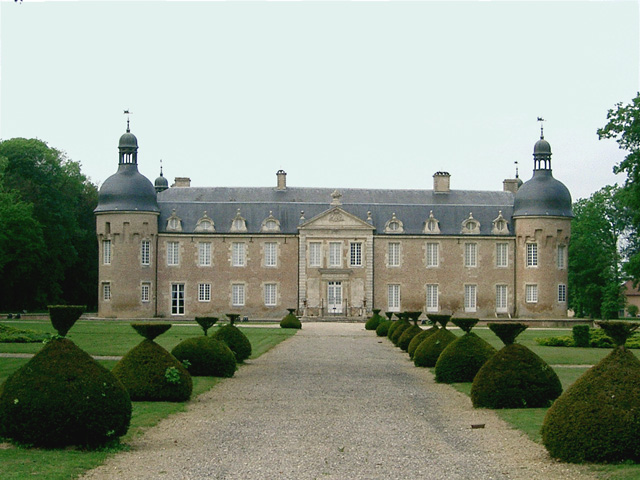 Location: Pierre-de-Bresse, in the Saône-et-Loire departement of France (Bourgogne Region).
Built: 1680.
Condition: In good condition.
Ownership / Access: Currently owned by General Council of Saône-et-Loire. It is now the Museum of the Bresse.
ISMH Reference Number: PA00113389
Notes: Château de Pierre-de-Bresse is located in the municipality of Pierre-de-Bresse in Saône-et-Loire, on the outskirts of the village on the plain. It is the subject of multiple protections as historical monuments rankings in October 1957 and November 1997, and registrations in July 1945 and May 1996. The two wings at right angles have the same exterior elevation than the main building. The horizontal reading emphasizes, however some important nuances. First, the peristyle is gone and the ground floor is pierced by twelve rectangular windows, inscribed in a doorway arches (the arches engaged and reminds the peristyle of the main building). Then a very decorative beaded headband, which did not exist in the first building, separating the ground floor upstairs. Finally, if the twelve windows of the floor exactly match the twelve windows on the ground floor, roof dormers are at number six and their wider intervals help ease the two facades. A sundial is located at the west end of the north wing. The three facades facing the outside do not have the beautiful order and symmetry of the openings of the inner courtyard, especially as regards the southern wing. The main building, however, has a central front building topped by a triangular pediment with, from both sides, four bays on the ground floor and upstairs. The attic different from what they are inside in the form of alternating round and oval windows. The castle is also characterized by the presence of four towers at the corners of the stately home. If they all have a similar structure, differences exist. The northwest tower has four gunboats, two down, two on the first floor, the northeast tower no, the southeast and southwest towers, two on the ground floor. Similarly, only two eastern towers are crowned with battlements. All are covered with four bulbous domes topped with a campanile. The castle is the property of the Saône-et-Loire department. It is open to the public.

How To Get To Château de Pierre-de-Bresse (Map):