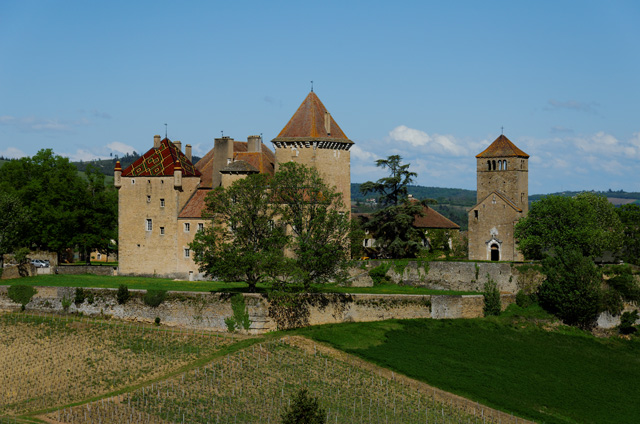 Location: Pierreclos, in the Saône-et-Loire departement of France (Bourgogne Region).
Built: 14th century.
Condition: In good condition.
Ownership / Access: Private property. Open to public.
ISMH Reference Number: PA00113392
Notes: Château de Pierreclos is located in the town of Pierreclos in Saône-et-Loire, on a terrace locking the Little Grosne valley. It is the subject of a registration as a historic monument since December 21, 1984.After a paved driveway hedgehog, a gate, between two small roofs covered pavilions at the Imperial, provides access to a forecourt a vaulted passage, connected by a door arched ashlar, surmounted of arms of Michon, separated from the courtyard. Angled buildings surround it on both sides. Southeast, stands a tall square tower crowned consoles a walkway or hoardings disappeared under a sewer pavilion roof upturned. Against it builds a rectangular building, oriented north-south. It includes, on its western facade, a square tower in work and is flanked on the northwest corner of a large square tower, confined to round pellets watchtowers built on the nineteenth century. This tower is topped with a pavilion roof. The body of main building at right angles to the east are two-storey square whose covers were very reworked. An unfinished building leans against him north. These buildings are served in the angle they form, by a staircase to screw suspenu whose bearings are covered with groin vaults falling on the Tuscan order pillars. Common and the remains of an old church from the second half of the twelfth century, of which there remains only the bell tower and the choir, complete the package. The castle is privately owned. It is open to the public.

How To Get To Château de Pierreclos (Map):